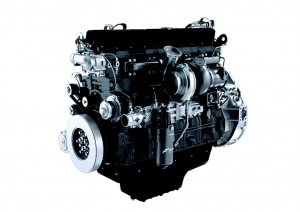 Case IH’s 240 series of combines, set to release in 2015, bear some of the largest grain tanks available and yet are still exulted for their productivity and efficiency.

The Axial-Flow 9240, the most powerful of the three new models, houses 410 bushels of grain, tops out at 625 peak horsepower and runs on a 15.9L in-line, 6-cylinder, Tier 4B/Final engine. According to Case, the engine’s selective catalytic reduction system allows it to average at 10% less fuel consumption than its Tier3  counterparts.

Besides hauling incredible loads, the new combines are also incredibly fast, unloading at rates of up to 4.5 bushels per second. The 8240 and 9240 are equipped with higher load-rated tires to match their grain tank capaciy.

In addition, the combines are pre-wired for a camera kit and have 30-inch tracks and ladder extension options.

In this video, taken at Farm Progress Show, RealAgriculture’s Bernard Tobin gets a tour of the new combines from Kelly Kravig, of CaseIH. They talk about some of the biggest changes to the engines, including those mentioned above, while also hitting on other special features, like the pivoting spout.

Or, listen instead via Soundcloud:

Canadian February Tractor Sales Were Strong According to AEM