Genetically engineering insects is no longer a vision for the future. In fact, one group of GE mosquitoes, Oxitec Ltd’s OX513A, have moved from proof of principle to deployment, and have been used in open field trials in Malaysia, Grand Cayman, and now in Brazil. The mosquitoes are hoped to control their non-modified counterpart, Aedes aegypti, the primary mosquito vector of dengue fever.

Severe dengue fever, or Dengue Haemorrhagic Fever, was first recognized during epidemics in the Phillippines and Thailand in the 1950s. Only nine countries then experienced severe dengue epidemics, but the disease continues to spread. Today, dengue fever is endemic in more than 100 countries, with now over 40% of the world’s population at risk, and, according to World Health Organization (WHO) estimates, 50-100 million dengue infections occurring per year.

OX513A males are released to mate with with female A. aegypti and any progeny resulting from their courtship die as late larvae or pupae. Allowing for a subsequent generation means the doomed insects compete for resources with wild-types, increasing their overall effectiveness at reducing dengue-vectoring populations.

There’s a very clear space for improvements in control of diseases borne by insects, but Oxitec doesn’t deal with public health alone. Another major part of their portfolio is finding potential solutions to high agricultural pest populations, including the scourge of many a Canadian canola field — the diamondback moth.

In order to find out more about genetically engineered insects (and how a company based in the United Kingdom can get away with that kind of work), we caught up with Simon Warner, Chief Scientific Officer of Oxitec Ltd, at the recent Agricultural Biotechnology International Conference in Saskatoon. 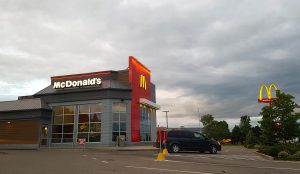 Poll: Is McDonald’s really a restaurant?

When someone suggests going to a restaurant to eat, does the well-known ________ chain with the golden arches come to mind? McDonald's has certainly tried to enhance its image well beyond being a source for quick, cheap (and delicious) calories in recent years, upgrading its buildings with TVs, lounge areas, and other aesthetics to improve…Read more »

The Soggy Reality of Manitoba Gets Beyond Winnipeg