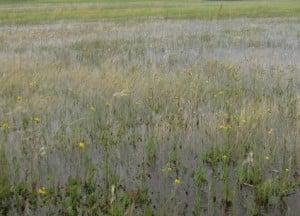 The Manitoba government estimates 75,000 acres of hayland belonging to approximately 330 farms around Lake Manitoba and Lake Winnipegosis were flooded in May and June.

“Manitoba farmers in many parts of the province have dealt with unprecedented wet weather and poor growing conditions this year,” said Kostyshyn. “Producers told us what was needed to ensure the health and sustainability of their herd over the winter and this program is a comprehensive response. I know this program has been long-awaited and Premier Selinger and I are pleased we were able to confirm our ongoing support for producers affected by flooding and excess moisture, above and beyond the programs already in place.”

Manitoba Beef Producers spent several months lobbying for a program to cover flood costs, some of which were incurred due to the province’s decision to divert water from the Assiniboine River into Lake Manitoba.

“We’re pleased with the announcement that came out today. We recognize that it’s not covering all the needs of producers, but we have a transportation program now that’s province-wide and a feed program that’s directed to folks that have been impacted by water issues for many years now,” explains MBP’s general manager Melinda German in the above interview.

KAP vice-president Dan Mazier said he doesn’t understand why the two levels of government are not recognizing the situation crop producers in parts of the province are facing.

He noted flooding in cumulative years has resulted in farmers having to pay a deductible of up to 30 percent to receive Excess Moisture Insurance coverage, as a five percent deductible is added every time a claim is made.

“And now, their hopes have been dashed for assistance through an AgriRecovery program,” he said,

KAP continues to lobby for 100-per-cent compensation on losses as a result of artificial flooding or the operation of water-control structures, including the Portage Diversion. It’s also pressing for changes to farm business risk management programs to make them more responsive.

Poll: Is marketing of food “differences” good or bad for farming?