A repeat of last winter’s logistical nightmare for grain in Western Canada is unlikely.

That’s because a combination of factors, including the federal shipping mandates for CN and CP Rail, summer weather and a smaller 2014 crop, have reduced the size of the rail backlog, noted the head of the company that monitors grain movement by rail for the Canadian government last week.

“Movement of grain has been pretty consistent. We’re still seeing high numbers. We’ve seen that since the beginning of the crop year, as a follow through out of the last crop year,” said Mark Hemmes of Quorum Corporation in the interview posted above, filmed after his presentation at the Cereals North America conference in Winnipeg. “We’re still way above the five-year average and it’s — for the better part — meeting the requirements of the federal legislation. So far, so good.” 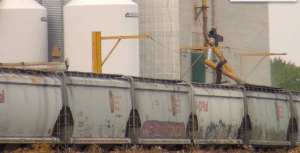 While the quantity of grain the railways will need to move this winter is smaller than last year, there will be more precision required as a consequence of quality issues in the 2014 crop. Hemmes said the efficiency of the grain handling system might decline as grain companies blend more grain later in the crop year.

“When you have to blend and have such a wide variety of quality aspects, you have to use more bin space. That reduces effectiveness of both the country and terminal elevators,” he explained. “We’ll see how that goes over the next few months, but so far it hasn’t had a big impact.”

Meanwhile, producer car shippers continue to wait for improved service, as CN and CP Rail focus on larger orders and shipping corridors with fast turnaround times. Hemmes told attendees at the conference on Wednesday that 11,000 orders for producer cars were still outstanding.

“I think the people at the Canadian Grain Commission are working hard with the folks at the railway on trying to increase the amount of car allocation dedicated to producer cars. The next few weeks will tell us whether or not they’ve had any success in those discussions,” he noted.

Hemmes also explained why he thinks the rail challenges in the U.S. this year will not have a major impact north of the border, how rising wait times for ships on the West Coast are impacting Canada’s “reliability and effectiveness as a trading nation,” and one of the most talked-about issues regarding rail — the amount of oil moving by train and how it’s impacting grain movement.