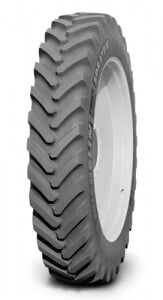 You likely remember Michelin expanding its lineup of AgriBib tires, with new features and sizes. Well, there’s more. In September, its SprayBib tire lineup also expanded, with the introduction of the new 50-inch model, the first VF sprayer tire offered in this size.

With a D speed rating, the new VF420/95R50 SprayBib can handle a load of 16 094 pounds at speeds up to 40mph. It’s able to carry the same load as its standard counterparts but with up to a 40% reduction in air pressure. In addition, the SprayBib is designed to provide traction, stability, crop protection and a reduction in soil compaction.

The VF420/95R50 177D SprayBib is now available in the replacement market and can be ordered on some 2015 model sprayers. SprayBib radials have an estimated lifespan of 3 to 5 years.

In the following video, filmed at Farm Progress Show, Bernard Tobin talks to Michelin’s Mike Pantaleo to hear more on some of the specifics of both the AgriBib and the SprayBib lineup.