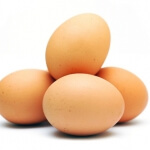 By Lilian Schaer for AgInnovation Ontario

AgriLux was developed through research led by Dr. Grégoy Bédécarrats from the University of Guelph’s Department of Animal and Poultry Science.

A partnership with Thies Electrical Distributing in Cambridge, Ontario helped bring the product to market.

Bédécarrats’ research shows the typical annual production of a modern laying hen increased from between 325 to 335 eggs, to 344 eggs during an annual production cycle. This means that a farm with 40,000 laying hens could produce an additional 360,000 to 760,000 eggs a year.

The new lighting also led to much calmer birds, and their feed consumption did not increase, despite the increased production.

Bédécarrats discovered that different light sources had a different effect on the brains of laying hens, and that chickens see much better in the red spectrum than humans do.

Incandescent light bulbs used in many barns have a light spectrum mainly on the red side, but they’re very energy inefficient. Compact fluorescent bulbs have a spectrum closer to the green side, but can be difficult to dim without flickering.

LED lights have a long half-life, are very energy efficient and can be created to a desired light spectrum.

Several years of testing and in-barn trials have resulted in AgriLux, which is dimmable, dust proof, and water resistant even when barns are pressured washed to clean them in between flocks. Its one-piece cast aluminum design keeps dust and water out.

A video posted on biotalk.ca provides more in-depth information about the work that went into developing AgriLux and how its impact on laying hens was measured: http://www.biotalk.ca/news/categories/agriculture/item/149-oaft-agrilux-july15-2014#.VE1JiMntlSQ.

This article is one in a series provided by AgInnovation Ontario highlighting innovation in Ontario’s agri-food sector. AgInnovation Ontario is a project of the Agri-Technology Commercialization Centre (ATCC). The ATCC is funded by Growing Forward 2, a federal-provincial-territorial initiative. www.aginnovationontario.ca.

Key take-aways from AgriTrade: order early, hold on to equipment, and stay optimistic