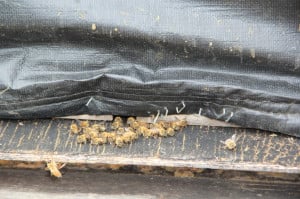 The Ministries of Agriculture, Food and Rural Affairs and Environment and Climate Change announced today plans aimed at reducing by 80% the number of acres planted to corn and soybeans using neonicotinoid-treated seed by 2017, a level of reduction that equates to a de-facto ban, according to farm groups.

The province also announced a goal of reducing the over-winter honeybee mortality rate to 15 per cent by 2020, and the establishment of a comprehensive Pollinator Health Action Plan.

Ontario has released a discussion paper on pollinator health for comment over 60 days on Ontario’s Environmental and Regulatory Registries. Consultation sessions will be held in December 2014 and January 2015 to seek input from industry, researchers, organizations and individuals. (Follow this link to see how to get in contact or to attend a meeting on the topic.)

Grain Farmers of Ontario says this announcement flies in the face of numerous efforts and investments made by grain farmers across the province over the past two years to mitigate risks to bee health.

“This new regulation is unfounded, impractical, and unrealistic and the government does not know how to implement it,” says Henry Van Ankum, Chair of Grain Farmers of Ontario. “With this announcement, agriculture and rural Ontario has been put on notice – the popular vote trumps science and practicality.”

Grain Farmers of Ontario has invested in ongoing multi-year research projects to mitigate risks to bee health associated with neonicotinoids. In 2014, all 28,000 grain farmers across the province followed new best management practices and utilized a new fluency agent to minimize possible seed treatment exposure to bees. This year, 70% less bee deaths were reported.

“A reduction at this level puts our farmers at a competitive disadvantage with the rest of the country and the rest of the North America,” says Barry Senft, CEO of Grain Farmers of Ontario. “It will mean smaller margins for grain farmers and could signal the transition away from family farms to large multinational farming operations that can sustain lower margins.”

Grain Farmers of Ontario has expressed its concerns over these regulations at all levels of government in recent meetings. A restriction at the 80% level is comparable to a total ban on the product, which the Conference Board of Canada estimates will cost Ontario farmers more than $630 million annually in lost revenue.

Agriculture wages could qualify for federal essential pay top up

More Cases of PEDV Confirmed in Manitoba; None at Farms