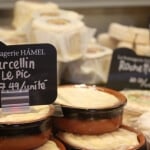 Ontario and Quebec ag ministers met recently to discuss opportunities to create an action plan for growing domestic and export markets in cooperation, including focusing on the SIAL international food trade show held annually in Toronto and Montreal.

According to a department press release, Jeff Leal, Ontario’s Minister of Agriculture, Food and Rural Affairs, and Pierre Paradis, Minister of Agriculture, Fisheries and Food of Quebec, committed to continue to press the federal government to fulfill its commitment to compensate the dairy sector as agreed under the Canada-European Union Comprehensive Economic and Trade Agreement (CETA).

Leal and Paradis also called on the federal government to clarify its intention regarding allocation of new cheese import quotas, with priority provided to parties that are impacted, while enhancing the growth of the cheese sector. They reiterated their support of Canada’s supply management system, and asked the federal government to include the reciprocity of standards in trade negotiations. Ministers also pledged to continue discussions with their federal partners on details of cheese import quota implementation. The supply managed sectors in Ontario and Que?bec account for approximately two-thirds (approximately 65%) of Canada’s supply managed farm gate receipts.

The ministers also discussed the need to work toward a better understanding of how consumer preferences and concerns affect the agriculture and food sector — including expectations around consumers’ right to know, food safety, climate change, animal welfare, and bee health. Ministers also discussed opportunities to address slaughter capacity in the north.

Cervus Equipment to be sold to Brandt Tractor