Saskatchewan’s Ministry of Agriculture has released a report outlining the quality profile of this year’s crop.

Only nine percent of the province’s spring wheat crop is projected to be graded number 1 — well below the 10 year average of 39 percent.

For winter wheat, only three percent is expected to grade as number 1, compared to the average for the last decade of 47 percent.

The quality challenges with durum have been well-documented, and the SaskAg data backs those reports up. Only 15 percent of durum falls into the top two grades — again, a far cry from the 10 year average of 66 percent.

For lentils, only five percent is expected to be graded number 1, versus the 10 year average of 33 percent.

It’s a similar story for malt barley, rye and peas.

Oilseed crops — canola and flax — suffered the least, with grades expected to fall in line with historical averages. 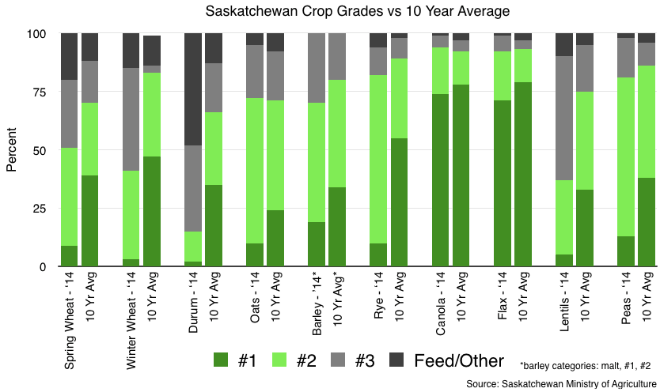