2014 started out with a lot of frustration: Grain was hardly moving through Canada as the Great White North experienced some record cold temperatures and record ice cover on the Great Lakes. With the railroads making more money moving oil, elevators couldn’t take deliveries and the amount of ships sitting at the port waiting for grain started to grow. The government finally made the decision to step in and force the railroads to move grain or else face some pretty hefty fines.

March continued to see wild price swings with the market focused on the lingering cold North American weather, continued logistical constraints, and geopolitical risk rising in Eastern Europe. Ukraine decided to join the European Union, angering pro-Russian separatists which lead to what many called a civil war on the Russian-Ukrainian border. This intuitively equaled some higher grain prices globally as concerns mounted if the growing grain-producing powerhouse that is the Black Sea would be able to move grain. However, grain did get moved as shipments barely slowed down and prices started to fall from their April highs as North American drills hit the fields full tilt come May.

At that time, there were also some muted concerns of an El Nino event rearing its head in the latter half of the year. The weather phenomenon was predicted to bring warmer temperatures to the Asia-Pacific region and heavier rains in South America, but all that we really saw was hotter temperatures in Eastern Australia and late monsoon rains in India. No crop was affected too greatly, and like past forecasted El Nino events, volatility showed its face for commodity prices, but these increased concerns led to pullback in prices as things didn’t turn out as bad as expected.

While these forecasts were garnering a lot of attention, the North American seeding rate was falling behind schedule, but with the new technologies available to farmers, most of the intended acres got seeded, including a record U.S. soybean crop. Specifically for canola, negative thoughts about a late start in the field in North America was offset by the simple fact that there was a record European rapeseed crop, record global soybean crop, and the remaining North American carryout in 2013 (I think we can all agree it was a once in a multi-generation crop). We made the call in mid-May that that would be the last time we would see $500/tonne canola for the next year-to-18 months, barring some terrible weather in South America (but things look good) or the pesticide ban in Europe creating more problems for their 2015 rapeseed crop

While the growing season in Western Canada saw see-saw growing conditions (a lot of Canada Day rain!), the American Midwest saw some of its best conditions ever, which forced prices to continue to slide. There were short pops in the market that sharp producers took advantage of, but a bottom wasn’t realized all the way until October for most crops. This was because the North American harvest was slowed down by untimely rains, seriously affecting quality, especially in Western Canada for pulse and cereal crops yet to be taken off, namely durum and lentils. If you found yourself with either of these taken off before the rains, it was quite likely that you enjoyed a multi-decade high in the price that you received.

From a global production standpoint, while Canada didn’t see 2013-like yields, the rest of the world did. Europe enjoyed record wheat and rapeseed crops (as mentioned), although the quality of the former was also adversely affected by untimely harvest rains. Record U.S. corn and soybean output has now led to a large rebuilding of ending stocks and to aggravate the bearish implications, weather and growing conditions for the big South American soybean crop looks very positive (also as mentioned).

What’s the bullish news? Western economic sanctions and oil prices sliding to $60 per barrel have put the Russian economy on the ropes, compounded by the Russian rouble losing almost half its value in 2014. Russia really is the bull in the china shop as they continue to test the Western world’s patience. Recently Russia announced restrictions on its wheat exports (both how much they export and the introduction of an export tax) as they try to curb rising domestic wheat prices and, consequently, bread prices. It’s not like the full-out ban that Russia introduced back in 2010 but it’s still something that’s added some recent strength to the wheat market, although most of this new risk has already been priced in. Keep in mind that while Russia is a major producer, the recent rise of neighbouring Black Sea players like Ukraine, Kazakhstan, and Romania will likely be able to help out on what Russia can no longer provide. Heading south to some of these customers in the Middle East, the geopolitical risk there continues to escalate as the I.S.I.S. militant group is seemingly more organized and resourceful than most had previously thought. Their religious vendetta and guerrilla-type warfare doesn’t seem to be slowing, creating concerns over commodity extraction and movement, namely oil and wheat (likely more of the latter will be imported into the region in 2015).

Ultimately, demand continues to grow thanks to Asia (namely China) and other areas of the Middle East and Africa not affected by terror group ISIS. However, demand grew slower than production in 2014 as there’s a global gluttony of grain that we have to work through now. We are seeing better rail movement in Western Canada but the U.S. is now having some problems of their own. This means that apart from Russia limiting wheat exports & trying to buy more for itself (it’s one of the largest growers and exporters in the world), one can expect more sideways to lower trading through the spring in other coarse grains and oilseeds. Truthfully, barring more a major weather event, these prices could be where we find ourselves see-sawing around over the next year, even two.

That being said, we here at FarmLead been promoting the “Cash Is King” mantra since Spring 2014 and, as such, there’s no time better than the present to uncover your eyes, take a good look at this neutral-bear market, and understand where your grain marketing strategy currently sits. Knowing your cost of production is your first step to managing risk proactively. From there, creating a realistic Plan A (and Plan B for lower or higher yields) allows you to remove most emotions from your sales. The more you deviate from your plan, the more emotional things become, and numbers become more psychological than they do logical (AKA rational). With all things being equal, bounces to the upside should be taken advantage of, as these “one-off” events (i.e. new developments in the Ukraine-Russian geopolitical situation) don’t come around every day. Scale-selling into these opportunities (10%-15% at a time) allows one to proactively manage price risk rather than reacting to the markets, which usually happens on the downside. We’re optimistic though that by being a pencil farmer now, 2015 can be a great year for you. 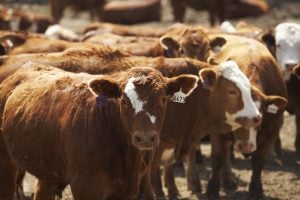 Hosts Anne Wasko and Shaun Haney get together every second Friday to talk about the beef markets — here in Canada, down in the U.S., after major market updates, and during the fall calf run. Subscribe on iTunesSubscribe on Google PlaySubscribe via RSSFollow Beef Market Update SpotifyFollow Realag on SpotifyRead more »

Risk-on, risk-off: a look at what’s driving the loonie’s return to seventy-five cents