It’s hard to believe it’s been a year since we didn’t send the last letter. Time really does fly. 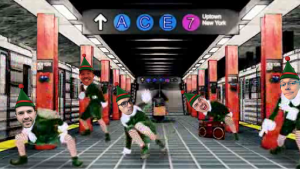 So much changed on the website this year. There’s a new timeline with upcoming events, a nifty Futures Market, and a behind-the-scenes members area. Oh, and we starred in a couple of videos for the holidays as well. It was a little uncomfortable in the elf costumes, and the team kept cracking corny jokes, but we got through it. Unfortunately, we couldn’t squeeze the whole crew into frames (and we were short outfits), so we have a Boy Band-inspired creation and a separate one with Lyndsey and Debra. We were a little nervous to share the videos, but elf it, there are more embarrassing things on the site already.

Shaun’s been busy traveling the globe, shaking hands and sharing pints. In fact, all that globetrotting had a powerful role in forming the recently announced TechTour LIVE — a RealAg event! We’re stoked, and so is Shaun, as he’ll be hitting every single event to emcee.

Not much is new with Lyndsey, except that she MOVED TO OTTAWA! Though we loved visiting Winterpeg to see her, the move is pretty exciting. She’s also been doing a lot of public speaking, and will be into the new year, including a gig in Alberta and a spot on the CropSphere roster with fellow Real Aggie Owen Roberts.

We try to keep Jay locked up to edit videos most of the time, but he escaped to cover some conferences this year. The rest of us have no idea how he puts up with some of the footage/instructions we send, but his creativity never ceases to impress and inspire. He’s still cheeky, too. Don’t worry.

Bernard has been all over southwestern Ontario, filming corn, soy and wheat school videos and getting up close and personal with the bee health consultation meetings held this month. He also moved this year — one entire house over. That and he’s been kept busy with a talented Standardbred named Entranced. Bern would love company at the track, if you’re up for it.

Debra’s been all over Saskatchewan and Alberta this year, so much so that we’re not sure where she actually lives anymore. We do know, though, that she’s been loading up on cattle- and grazing-focused stories, so keep watch for those in the new year. If you ask her very nicely she may also post another Depth of Field post.

Rhett’s ponytail continues to impress and distress, but it seems to keep him content enough to stay on task (he’s the one you can thank for spearheading many of the big changes to the layout of the site and the creation of the Futures app). That said, it’ll likely be no surprise if the Man-Bun is completely gray by next year, as Rhett’s job often involves translating the wilds of the Internet to Luddite for the likes of Lyndsey, and sometimes has to stop Kelvin from wrecking the website with Latin symbols. Poor guy.

Speaking of Kelvin, our newest team member has, as Rick Taillieu put it, kicked up our level of professionalism an entire level. I mean, have you heard that radio voice? Kelvin started at the end of August and we’ve hardly been able to keep up with all the news and event coverage he produces. If you haven’t been checking out his weekly news updates, you’re missing out big time.

Well, that’s an update for 2014. Hope all is well with you and yours, and a big thank you from all of us. We wouldn’t be here without your support, and we’re grateful every day for it. Now, let’s go over indulge in baked goods, wrapping paper and time with family!

Beef Market Update – Will 2012 Be Great For the Rancher and the Cattle Feeder?

100 per cent Canadian cream…liquor (!) gets the Blue Cow logo