Coca-Cola announced its acquisition of equity stakes with Select Milk Producers, Inc. of Fair Oaks Farms Brands, LLC in 2012. Then, the acquisition was largely based around “Core Power,” a milk shake marketed as a high-protein, natural, post-workout drink. But few knew much about the company’s move into dairy until the “fairlife” milk brand recently began its national conquest in the United States.

Fairlife markets its milk as a value-added product, with 50% more protein and calcium and half the sugar of other milk, while also being lactose-free. According to fairlife, the company uses a cold filtration technique to separate their milk’s components. They can then re-mix these ingredients to increase or decrease the concentration of certain components. 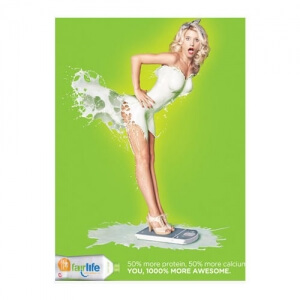 Coca-Cola’s ever-expanding presence in the marketplace is certainly controversial, but its controversy is perhaps trumped in the light of fairlife’s marketing campain.

“Drink what she’s wearing,” says the text of one fairlife poster, which shows a pin-up girl draped in a dress of milk. “Better milk looks good on you,” says another, featuring a woman on a scale, mouth open, her milky dress barely covering her backside.

Related: POLL: CWB Releases Steamy Ad to Get You Off the Fence (2013)

The company felt inspired by Jaroslav Wieczorkiewicz, a London-based photographer who uses real milk, real splashes and real models to create his images. And now, fairlife uses his work.

“Wieczorkiewicz’s work epitomizes our fairlife philosophy of embracing the future, with a nod to what’s wholesome and timeless,” the fairlife website explains in a “FAQ” framed around the campaigns uniqueness.

And, if you weren’t a fan of A&W’s “Better Beef” campaign, you won’t enjoy fairlife’s “Believe in Better” marketing strategy. Live Better. Do Better. Be Better.

With negative reaction continuing to circle their pin-ups on social media, I can’t help but wonder if fairlife should heed its own advice.

Coca Cola – staying true to its roots & continuing to exploit patriarchal stereotypes of women. Shame. May their “milk” sour continually.

I think if Coca Cola can get the fitness market onto this “higher protein, less sugar” milk it will have a cash cow on its hands

Would you pay twice as much for #high #protein #milk? Coca-Cola thinks you will! pic.twitter.com/6XTPbdU1M5