There’s been a general decline in prices for used farm machinery in North America since late summer, with some notable exceptions, including larger equipment here in Canada, says a well-known follower of farm auctions across the continent.

In the interview below, he says overall auction values for large one-to-five-year-old farm equipment dropped by 15 to 25 percent between mid-August and the end of October. 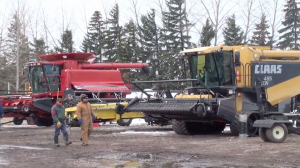 He’s not sure why, but prices for large used equipment in Canada have not fallen to the same extent.

“”You guys north of the border, your used values held up much, much better,” explains Peterson. “It was almost night and day. Auction prices in Manitoba, Saskatchewan, Alberta and Ontario were way higher than down here in the U.S. That has really stood out, especially since late summer.”

The difference appears to be greatest in the market for used high-horsepower units, he says: “The four-wheel-drive market has been higher north of the border for five solid years and it seems like every year the difference sharpens a little more.”

Equipment that can be used on livestock operations has also bucked the declining price trend, notes Peterson.

“Through this whole year of 2014 we’ve seen increasingly higher and higher auction prices on things like good, used skidsteers, manure spreaders, round balers have gone up a little bit, also forage choppers, forage boxes,” he says.

Looking ahead, he believes there’s potential for further declines in used equipment prices.

“Dealers have way too much one-to-five year-old large, used equipment items on their lots,” says Peterson, noting any increase to interest rates would also put pressure on dealers to sell inventory.

If Only Your Tractor Could Talk