To some, animal agriculture is no more than the exploitation of innocent lives, often likened to human slavery, rape and torture. The animals didn’t ask to be confined to cages, separated from their mothers or artificially inseminated, opponents argue. Thus, humans should take on a vegan diet, void of any animal products or by-products. Instead, it’s plants humans should “exploit.” 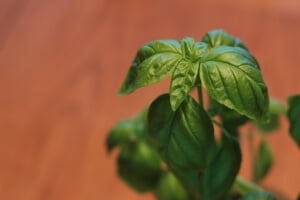 Okay, I talk a tough game, but I get it. I can’t put animals down, and have a hard time seeing an animal shot. Likewise, it’s difficult for me to snip leaves off of my indoor basil, cut a tree for lumber, or give up on a plant that’s not fairing well. They’re living creatures too, and we all have a place on this earth. And, in a sense, that’s how I know it’s okay to harvest plants and animals to eat. It’s a complex web of interactions, it’s how we evolved and, quite simply, it’s natural.

When scientists first started to suggest that plants could be intelligent creatures, they were met with a wave of skepticism. Now, they have their own field of study, often refered to as “plant neurobiology,” even though plants don’t have the central nervous system we do.

“They have analagous structures,” Michael Pollan told Public Radio International. “They have ways of taking all the sensory data they gather in their everyday lives … integrate it and then behave in an appropriate way in response. And they do this without brains, which, in a way, is what’s incredible about it, because we automatically assume you need a brain to process information.”

Through this field of study (whatever you want to call it), scientists have gathered all kinds of information about how plants interact with their environment. There have been studies to show they react to light, sound vibrations and even “eavesdrop” on herbivorous approach. Sometimes, their reaction is one of self-preservation, and other times, it involves communicating to companions.

Beyond the basic responses plants make to available light (like growing towards it or elongated stems in search of it), I first heard of plant response to changes in light from Kevin Folta, a professor, scientist and active blogger (See Lights, Plants and An Orchestra of Flavours). According to Folta’s research, changes in light wavelength can lead to changes in affected-plant colour and even flavour.

“We forget that light is a packet of instructions and that when you’re a plant, and you’re stuck in one place with a root, different parts of the spectrum can have profound effects on the decisions you make,” says Folta. “And so what we can do, is essentially paint plants based on the colours of light we provide.”

A study at the University of Missouri also recently caught my eye. It showed that plants respond to sound vibrations. The scientists recorded the vibrations of a caterpillar chewing leaves of an Arabidopsis plant, then exposed some plants to those movements, and others to silence. What they found was remarkable. When caterpillars were placed on both sets of plants after the exposure, the plants that had “felt” or “heard” the vibrations, produced more glucosinolates and anthocyanin (defense chemicals unappealing to foraging caterpillars). When exposed to vibrations similar to that induced by wind or the sounds of a non-harmful insect, the plants didn’t respond with the same elevated defence.

“There are so many other forms of information that we know plants respond to,” John Orrock, associate professor of zoology, told Emma Weissmann. “We know they pay attention to light; we know they pay attention to a vast array of chemicals both in the soil and in the air around them … Plants are balancing a lot of information at any given moment in time. And now we know that acoustic information is something they’re also balancing.”

Defense mechanisms in plants are often aroused when predator’s attack. But do the plants “feel” for cues before attack? A study out of the University of Wisconsin-Maddison showed that the mere presence of snail slime resulted in black mustard plants becoming less palatable. And, the more recent the slimey warning, the more toxic or unpleasant the plant.

What’s more, plants often communicate their distress, giving and receiving signals through air or soil. A 1983 study showed increased levels of phenolics, hydrolyzable and condensed tannins in maples that shared a space with some stressed by defoliation, another indicated trees near those attacked by tent caterpillars exhibited changes to leaf quality and a study published in 1990 seemed to demonstrate that leaf-to-leaf communication could even occur between two very different species. More recent studies suggest some plants can use soil fungi to both communicate and share resources (BBC’s Plants talk to each other using an internet of fungus) and older maize varieties “called in” parasitoids in response to egg deposit by stemborer moths.

I mean if you’re hungry or thirsty, you can walk to the nearest watering hole (or bar). If you’re hot, you can move north, if you’re looking for a mate, you can go out to a party. But plants are immobile. They need to see where their food is. They need to feel the weather, and they need to smell danger. And then they need to be able to integrate all of this very dynamic and changing information. Just because we don’t see plants moving doesn’t mean that there’s not a very rich and dynamic world going on inside the plant.
– Daniel Chamovitz, scientist and author of What a Plant Knows, speaking to Gareth Cook

Many behavioural studies of plants have been refuted — like claims that they respond to human thought — yet so many more have revealed the amazing complexities of their sensory pathways, responses to stress and abilities to communicate. In trying to understand these complexities, we often walk a fine line (as we do when discussing fauna species). Is it safe to say plants and animals “feel” in the same way we do? Should those complexities impact our choice in diet? And, my final question challenges truly refraining from “speciesism:” if growing and caring for food animals is exploitation, what is the process whereby crops are seeded, fertilized, and subsequently eaten — often alive?

That’s the dilemma of an empathetic omnivore in a world of anthropomorphism.

2 thoughts on “The Dilemma of an Empathetic Omnivore”