While research shows fungicide applications in wheat and corn can often be justified by higher yields, the yield response to fungicides in soybeans is not as clear cut.

Timing of fungicide application might be part of the formula for getting better than break-even returns, says Dave Hooker, field crop agronomist and assistant professor at the University of Guelph-Ridgetown, in this Soybean School episode.

More agronomic discussions about soybeans in the Soybean School archives

After conducting more than 3,000 side-by-side comparisons, Hooker and researchers with OMAFRA have found an average yield increase of 2.1 bushels per acre from fungicide. 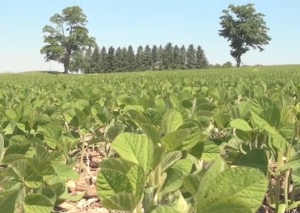 “It’s quite variable. Half those fields are less than 2 bushels per acre, which could be questionable in terms of just breaking even,” he says, in the interview below, filmed at the Southwest Ag Conference earlier this month. “So I’m looking at these other comparisons that are averaging more than 2 bushels an acre, and our main question is why are some fields responding with 3 or 4 more bushels per acre when others are responding with less than 2?”

Starting in 2013, they tried tinkering with the timing of fungicide application, and Hooker says he thinks they may be on to something.

“We had about a bushel to a bushel and a half more soybean yield between applying at R2 and R3, which is a whole 10 to 14 days earlier than what we had been putting fungicides on. That’s where we got that 2.1 bushel an acre (average) — mainly from that later application,” he explains. “We’re thinking if we applied fungicides earlier, then we can improve on that 2.1 to make the fungicide response more predictable and economically favourable.”

Hooker describes their findings correlating fungicide with yield, and also discusses concerns that increased fungicide use could lead to fungicide-resistant disease strains:

Unpacking the promise of cover crops

The Agronomists, Ep 90: John Gavloski and James Tansey on lesser-known and up-and-coming pests

At Constant Canopy Farms in Gaston, Indiana, Jason Mauck does things a little differently. He joins Shaun Haney for this RealAg LIVE! Q&A to talk relay cropping, sunlight interception, and moving livestock on to crop land. Tune in to RealAg LIVE! at 3 pm Eastern Tuesdays to Thursdays on Facebook, Twitter, and YouTube. Constant Canopy…