It’s difficult to know exactly what motivated a Manitoba teenager charged with the theft of nine animals in 2014, but in Oklahoma, officials say cattle rustling is largely motivated by drugs.

Last year, there were 30 reported thefts of cattle in the state, more than double the 13 reported the year previous.

“Cattle rustling has been around since Moby Dick was a minnow, but the price of cattle has doubled and tripled in the past few years, and theft is on the rise,” Jerry Flowers, chief agent of investigations for the Oklahoma Department of Agriculture, told Reuters.

According to officials, roughly 75-80% of the reported cases are linked to users wanting to fund their addiction to methamphetamine, an illegal, central nervous system stimulant. In Tulsa County alone, police identified 979 contaminated meth lab sites, the most of any county in all of the United States.

“We’ve seen an elevated number of reported thefts, and certainly actual thefts over the past couple of years,” Michael Casey, executive vice president of the Oklahoma Cattlemen’s Association, told VICE News. “What is very concerning is the link to drug use.” 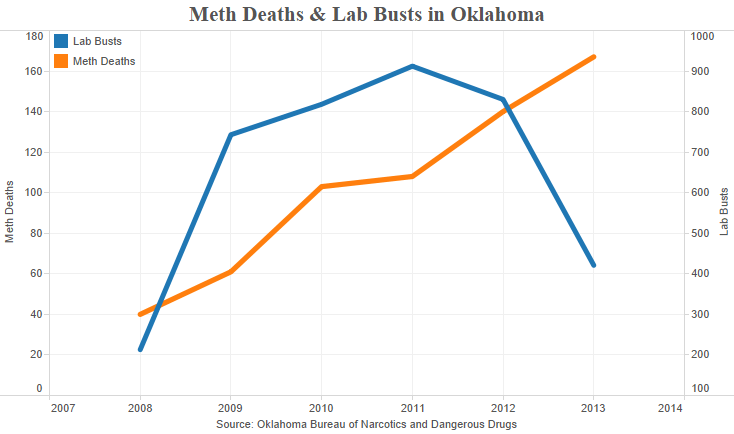 The decline in labs is partly due to a national database that tracks the purchases of pseudoephedrine, one of the main ingredients in manufacturing meth, a change that leaves addicts buying the drug from Mexico.

“The meth users themselves, who used to be cooks, are saying, ‘Why risk getting caught at a pharmacy, leaving a paper trail or blowing up a house when I’ve got a connection with a guy who’s bringing 10 pounds into Oklahoma City or Tulsa out of Dallas … Mexican ice that will be here in two days?’” OBN spokesman Mark Woodward said. “The Mexican cartels are filling the void left over by these people who still need meth but can’t cook it anymore.”

Cattle rustlers in Oklahoma can face up to ten years in prison per head.