Soil moisture observations collected by a new NASA satellite will be used for a number of agricultural applications in Canada. The space agency launched the SMAP (Soil Moisture Active Passive) satellite on Saturday, January 31st — it’s the first satellite dedicated to monitoring soil moisture levels around the globe.

Jarrett Powers, manager of Agriculture and Agri-Food Canada’s Knowledge and Technology Transfer Office in Winnipeg, says AAFC will be using the soil moisture and freeze-thaw data collected by the satellite to monitor the extent and severity of droughts and floods.

“Another area I see it benefiting is hydrological monitoring and flood forecasting. Soil moisture is an important parameter in determining extent of run-off,” he says in the interview below.

Measuring moisture in the top five centimetres (two inches) of the Earth’s surface, SMAP will orbit the planet every 98.5 minutes and repeat the same track every eight days. With a 1,000 kilometre-wide scope, the satellite will record soil information for any given location every two to three days, depending on latitude. Both AAFC and Environment Canada will receive the readings within a day, says Powers.

“Environment Canada is heavily invested in this project. They see the soil moisture information as valuable in helping produce more accurate weather forecasts, so certainly another benefit to agriculture,” he notes.

In addition to soil temperature, the SMAP satellite will also detect whether ground is frozen, which NASA says will help scientists understand changes in the length of growing seasons.

AAFC is also involved in validating the data collected by the SMAP satellite. A large field campaign using NASA aircraft was conducted in the Carman/Portage area in southern Manitoba in 2012, verifying that the technology used by the satellite corresponded with data collected by soil monitoring stations on the ground (read more about the project here.) Now that the satellite has been launched, a network of nine monitoring stations in southern Manitoba, as well as five in Ontario, will be used by NASA to validate observations from the satellite.

While NASA’s commitment is to a three-year mission, Powers says they expect the satellite will continue sending soil moisture data “well beyond three years.” 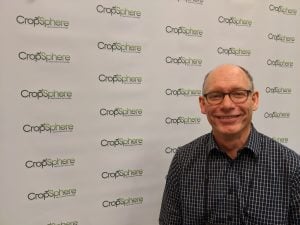 What Roquette wants: Prepping for the pea growing season

If you've driven the open stretch of Trans-Canada highway between Winnipeg and Brandon, you may have noticed a new build project not far from Portage la Prairie. French company Roquette is set to open its pea processing plant by the end of 2020, which means it's gearing up to start purchasing yellow peas this fall.…Read more »