Both national railways say they reject the findings of a coalition representing agricultural shippers in Western Canada.

The Ag Transport Coalition, which includes producer groups and grain companies, has started publishing weekly reports on rail performance in an effort to increase transparency and accountability between shippers and railways. The most recent report included performance information up until January 11th. According to the coalition’s data, Canadian National and Canadian Pacific failed to supply 15,743 hopper cars ordered by shippers through the first 23 weeks of the current crop year, which represents a shortfall of about 9 percent.

However, both CN and CP are criticizing the reporting.

“CN does not accept the Ag Transport Coalition’s analysis and claims regarding outstanding orders and railway dwell times, which are neither comprehensive nor transparent,” read a statement released by CN on February 9th.

CN says the number of grain cars it shipped during the first half of the current crop year was 18 percent higher than in 2013/14. The railway says it is “essentially current” on meeting grain car orders, and that the coalition is basing its numbers on “phantom orders” and a “shadow order book” that is only visible to the Ag Transport Coalition. (CN implemented its own cap on the number of cars a shipper can order this past fall, leading to the different interpretation between the shippers and the railway of how many orders are outstanding.)

Meanwhile, CP is critical of the coalition itself, saying it “is appalled that a government-funded group such as the Ag Transport Coalition can claim it is trying to enhance ‘the competitiveness of the agricultural supply chain,’ but not involve transportation partners in the discussion.” 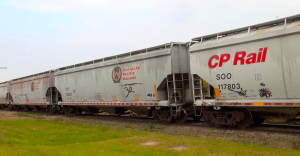 “The use of public funds to drive a single, self-serving agenda under the guise of solving large, complex supply chain issues is unconscionable,” said CP CEO Hunter Harrison in a statement on January 30th. “It is disingenuous for the Ag Transport Coalition to say it wants to improve the agricultural supply chain if they don’t want to involve transportation stakeholders in the discussion.”

The weekly reports from the Ag Transport Coalition can be found here.

What we know, and don’t know, about canola production in the brown soil zone

At Constant Canopy Farms in Gaston, Indiana, Jason Mauck does things a little differently. He joins Shaun Haney for this RealAg LIVE! Q&A to talk relay cropping, sunlight interception, and moving livestock on to crop land. Tune in to RealAg LIVE! at 3 pm Eastern Tuesdays to Thursdays on Facebook, Twitter, and YouTube. Constant Canopy…