It’s nearly the middle of March, but it feels more like May in many parts of Western Canada. Spring-like days with temps in the double digits for much of the southern areas of Alberta and Saskatchewan seem to have buoyed cattle markets, as it’s likely grass will be abundant and soon. 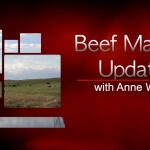 That’s the latest Beef Market Update update from Anne Wasko, with Gateway Livestock, recorded while enjoying the plus 19 sunshine outside of Medicine Hat (safety first: she was stopped and pulled over, we promise).

Also in the report below, Wasko summarizes the StatsCan January 1 numbers outlining the size of the Canadian cattle herd (See the full StatsCan report here). While the 2% and 2.5% drop in numbers (for cows and calves respectively), wasn’t a surprise, Wasko says this should be the beginning of the end of downsizing. When will cattle numbers climb? A look at a timeline, below.

Beef Market Update – JBS, January Doldrums and the Latest in the Cattle Markets

An Overview of Premises ID for Livestock Owners in Alberta

Using best management practices (BMPs) with fertilizer management is all about making sure the nutrient is available to the plant while minimizing movement out or off the field, via air, water, or soil movement. To tackle what a fall-focused BMP might look like for phosphorus and nitrogen, host of The Agronomists, Lyndsey Smith, is joined…