The Canadian poultry sector is working with the Canadian Food Inspection Agency to minimize the impact the outbreak of H5N2 avian influenza in the U.S. has at home.

Following findings of the highly pathogenic strain, the CFIA has restricted imports of live birds and poultry products from Kansas, Missouri, Minnesota, California, Idaho, Oregon, Washington and  — the big one for Canadian chicken producers and hatcheries — Arkansas.

The discovery of H5N2 in Arkansas is significant because about 20 percent of broiler hatching eggs in Canada are imported. These are eggs that eventually produce chicken sold in Canadian grocery stores. 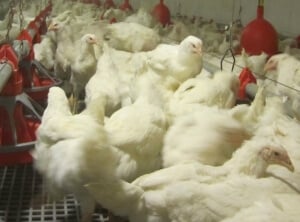 “Of that 20 percent, 90 percent or more come from Arkansas,” notes Robin Horel, president and CEO of the Canadian Poultry and Egg Processors Council, in the interview below.

When the H5N2 virus was confirmed in a turkey flock in Arkansas on March 11th, the CFIA suspended imports of live poultry, birds and raw or untreated avian products from the entire state, sending some hatcheries in Canada scrambling for eggs.

Horel says as of March 18th, the CFIA agreed to reduce the restrictions to two counties in Arkansas — Boone County and Marion County (see a complete list of restricted regions here.)

“Through some really good work over the course of the last week with CFIA, who actually sent people right onto the ground in Arkansas to talk to the authorities there, and with our industry counterparts in the U.S., we’ve been able to get our questions answered around zoning and movement control,” he explains. “Those counties are not where the hatching eggs are produced, and so we can start resuming trade as early as this weekend.” (continued below)

In addition to hatching eggs, some day-old broiler breeder chicks are also imported from Arkansas, but Horel suggests the restrictions did not have a major impact.

So far, he says the hiccup in egg supply shouldn’t impact Canadian processors or consumers.

“Provided we don’t have other serious issues forthcoming, Canadian consumers won’t notice anything,”

All of this could change quickly if there are more cases discovered, and with wild birds migrating north along the Mississippi flyway, there’s potential the pathogen could move north. Canadian producers have been reminded to be vigilant with their biosecurity practices.

“We’re about to see how good we are,” notes Horel.

Growing Phosphorus Disparity Is Not Sustainable

Are you Wearing Green and White? It’s National 4-H Day!

Inside ‘The Real Dirt on Farming’