Brassicogethes aeneus, commonly referred to as the pollen beetle and formerly known as Meligethes aeneus, is a major pest of canola in countries like Scandinavia, and, is now present in eastern Canada. And, though they are not yet a problem in western Canada, entomologists are suggesting we become familiar with what to look for.

“One nice thing about telling lots of people what to look for, is then we’re more likely to find it early and we may be able to do an eradication if we find it before it’s well established,” says Scott Meers, insect management specialist with Alberta Agriculture and Rural Development.

Pollen beetle larvae develop from eggs laid in flower buds of host plants, where they feed on pollen and nectar well into their adult lives. But, even as adults, they can be tricky to find. They’re tiny — sizing in at only about 2-3mm in length and 1-2mm in width — and black, with a hint of metallic green.

Meers was one of the speakers at CanoLAB in Saskatoon, where we caught up with him to find out more about the aptly named pollen beetle, in this episode of the Canola School: 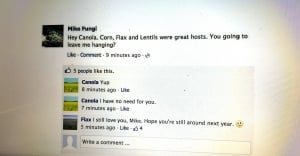 Canola School: Making Up for Canola’s Nonexistent Relationship with Mycorrhizae

If the world of soil biology had its own version of Facebook, crops like peas, lentils, corn and flax would be listed as "in a symbiotic relationship" with mycorrhizal fungi. The microscopic organisms help these crops access phosphorus in the soil. Wheat would probably be friends with mycorrhiza, as cereals see some benefit from having…Read more »

Pulse School: Assessing In-Field Tools for Managing Aphanomyces (Do I Have to Wait Six Years?)

Under the Microscope – Putting Germination Tests In Perspective