Although prices have retreated from the sky-high levels that followed the quality problems around the world last year, durum acres are expected to rise by up to 20 percent in Western Canada in 2015.

“With the prices that we’ve seen this year, we should see an increase for acres,” said Alan Hagemeier, a Minneapolis-based merchandiser with CHS Inc. in the interview below, filmed at the Grainworld outlook conference in Winnipeg last month. 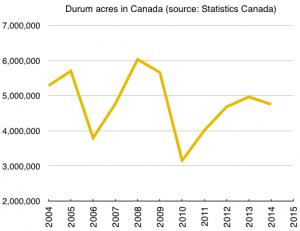 There are projections that durum acres will exceed 5 million for the first time since 2009 (Statistics Canada says there were 4.75 million acres of durum seeded in Canada last year.)

“I’ve heard numbers as high as 20 percent more, and I think if we have 20 percent more that could submarine the market,” he said. “Canada is the leader of the pack, so a lot of (what happens with prices) will hinge on just how many acres we put on in Canada.”

He noted the durum crops in Mexico and the U.S. desert are in good shape. Conditions in Europe are also looking favourable, although he said there’s still potential for weather problems.

“The one positive (for price) that could happen is a weather concern in the E.U. If we get rain at the wrong time in France, Spain and Italy, we might need 20 percent more in Canada, so time will tell.”

Another speaker at GrainWorld — Rob Saik of AgriTrend — shared his company’s durum acreage projections, with acres up 15 percent to 5.5 million.

The Agronomists, Ep 99: Managing residue ahead of soybeans with Horst Bohner and Dr. Yvonne Lawley

If soybeans need a cozy warm seedbed to get rolling, tillage is a must, right? Well, no and no. Emerging research suggests that cool soil isn't nearly the detriment to soybean growth once thought, which also means working an entire field for spring "warm up" isn't required either. To dig in to managing residue ahead…