In farming, time is often the most scarce resource. Working longer hours isn’t an option. So RealAgriculture.com, together with Dow AgroSciences, are hosting a series of one-day conferences across Western Canada focused on making the most of our time — being as efficient as possible.

TechTour Live kicked off in Brandon on Monday, featuring business coach Donald Cooper (of Cooper Sporting Goods) and operational efficiency expert Bob Parker (author and founder of the Pit Crew Challenge.) The schedule for each stop on the tour also includes a TechTour Panel discussion, with industry experts and tech-savvy growers. The panelists in Brandon included Peter Gredig of AgNition, Don Henry of Morris Industries, Rob Park of RJP Seed and Kevin Serfas of Serfas Farm. 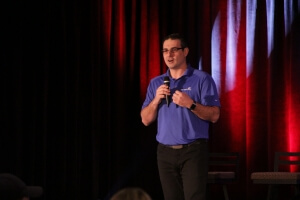 Shaun Haney opening the day up, noting agriculture is as competitive as ever, but farmers also have better tools than ever before.

“The mobile aspect of phones fits well with farming. What part of the job do you hate most? Many farmers will say ‘being in the office.'” 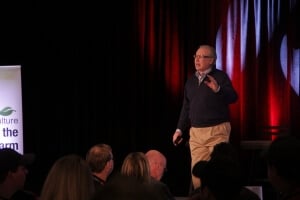 Donald Cooper of Cooper Sporting Goods discussing the keys to ag profitability — efficiency gains to be made in two main areas: yield and operations/management.

Regarding farm succession: “Need to realize that passing on of asset and authority are not the same.”

“Businesses don’t die from a single shot to the head…they die, slowly but surely, from a 1000 uncompleted tasks.”

Whenever assigning a task, ask this “by when can we agree this task will be completed?” It creates accountability and a sense of urgency, suggests Cooper. 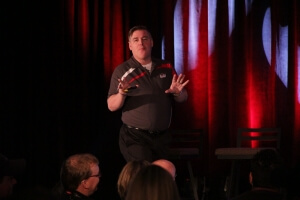 Bob Parker of the Pit Crew Challenge explaining how NASCAR pit crew practices can be applied on farms. Races are won in the pits.

“Speed should not become more important than safety and quality. All three values are equally important for efficiency. Don’t prioritize.”

“When there is ambiguity, people fill in the blanks with their own context”- Bob Parker. So true in ag. #techtourlive — Brittany Turchyn (@brittanyturchyn) March 2, 2015

Lunch is over…back to blogging what’s going on here at TechTour Live in Brandon. Donald Cooper is back on stage now for the workshop portion of the day:

Has your farm business become your “neat fort” ie where you go to get away and feel in-control? No talk about vision, succession or exit strategy.

Donald Cooper talking about priorities in our business, why do we farm? What drives us to farm? #techtourlive pic.twitter.com/MYStcguCvW — Landon Friesen (@landon707) March 2, 2015

Define ‘success’ for your farm. How does your definition compare with family members’?

Now time for workshop on managing and workplace culture with Bob Parker:

Parker asks a big question — what is one thing, if you could get if off your plate, would free you to do the things you want to do? Get it off your plate! Give it to someone who has the skill to do it.

And wrapping up the day — the TechTour panel with panelists listed above discussing what they see as the biggest recent or impending advancements in technology that boosts efficiency. Some of their thoughts:
– mobile phone tech
– tile drainage in Western Canada
– precision placement of seed
– ability to communicate between and monitor equipment in the field
– relationships that come with tech are just as important as the tech itself
– by cutting filling time, you don’t necessarily need to go bigger with equipment
– are farmers having to learn how to use technology that they haven’t asked for/don’t need?

It’s not too late! Click here to register for the upcoming TechTour Live conferences in Saskatoon, Camrose or Lethbridge.

Understanding ourselves key to navigating the toughest conversations: Jeffrey

What Will Farmers Do When They No Longer Drive Tractors?