You can’t make a silk purse out of a sow’s ear, but sometimes looks really don’t matter. Take misshapen and imperfect fruits and veggies, for instance. Until now, they’ve been chopped and whirred into soup or sometimes straight into compost instead of hitting store shelves. That’s despite the fact that much of this “too ugly” produce has nothing wrong with it beyond appearance.

That may all soon change as the Sterling Rice Group has named the selling of imperfect produce as a top culinary trend for 2015.

Waste Not Want Not

According to the Food and Agricultural Organization (FAO) of the United Nations, approximately one-third of food produced for human consumption is lost or wasted globally. Per year, those losses amount to an astonishing 1.3 billion tons.

In Canada, the cost of food waste amounts to roughly $31B per year. That’s higher than the combined gross domestic product of the world’s 29 poorest countries, says the 2014 report. And that’s only the tip of the ice berg. Assuming the cumulative cost of associated wastes is two and a half times greater, as suggested by the FAO, the overall cost of food waste in Canada is well over $100 billion/year. It’s estimated that 30% of the fruit and vegetables grown in North America never hit store shelves for aesthetic reasons.

That’s why, this week, Loblaw Companies announced its campaign to sell Naturally Imperfect apples and potatoes. The produce will be available in Great Canadian Superstores and no frills locations in Ontario and select Maxi retails in Quebec, with the hopes to expand to a national level.

“Produce involved in the no name Naturally Imperfect program was previously used in juices, sauces or soups, or may not have been harvested due to their small size,” according to the release. “With this program, Loblaw Companies is working to ensure farmers have a market for smaller, misshapen fruit ensuring it does not go to waste.”

This isn’t the first time “ugly” fruit and vegetables have been offered to consumers. Intermarché in France might just be credited with starting, or at the very least fuelling, the ugly food revolution fire. The chain marketed its ‘disfigured’ and ‘grotesque’ vegetables as just that, and, like Loblaw, at 30% cheaper than their runway counterparts. 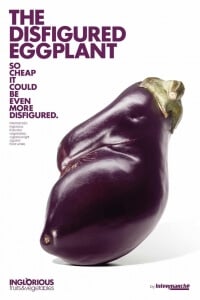 “Most of the fruit and veg isn’t ugly, it’s just not right for sale – perhaps too small or too large or with a blemish on the skin,” a company spokesperson told Connexion. “Perfectly edible but not a good-looking product. Rather than throw food away we looked for a way to continue to sell it and decided to offer it at a discount.”

In the town of Provins, France, the chain sold 1.2 tons of ugly produce in the first two days of the promotion, and saw similar success at other retails. The company ended up bringing it back for a week in October to all 1800 stores.

Other initiatives have involved “Misfit,” “Weather Blemished” and unwanted produce in Alberta, the United Kingdom and Portugal. And, there are campaigns cropping up worldwide.

Those opposed to the growing interest in selling ugly produce tend to believe it has a place elsewhere — in homeless shelters and food banks. But, for the most part, social media platforms have lit up with the love of ugly produce. We could very well be seeing the start of the Ugly Food Revolution.

@Candice_Indie88 @LoblawsON #shame #loblaw selling #UglyFruitAndVeg at NoFrills. Let the peasants eat it and make sure they pay! #greed

#UglyFruitAndVeg it may be winter but my taste buds are vying for these ugly beauties. pic.twitter.com/KOvkjnK3hr

Let us know what you think of 30% off ugly fruit and veg. Would you buy it? Leave a comment below, or send a tweet mentioning @realagriculture. If it’s ‘ugly’ enough, we might just add it to the list above!

When Should I Change my Openers?

Will Running in 2015 be Gerry Ritz’s Biggest Political Regret?