Ergot (often refered to as “Ergot of Rye”) is a disease caused by the plant fungus Claviceps pururea. It’s history with humans is rich and painful, believed to be a contributing factor in the Salem Witch Trials, and the diagnoses of “Holy Fire,” later termed “St. Anthony’s Fire.” Today, it is regarded as a highly toxic pathogen, and treated with the utmost care to prevent human and animal illness.

Once a host plant is infected, a secondary phase develops, with an amalgamation of honeydew droplets and ergot spores called conidia. The honeydew (pictured at the top of this page) is then spread through insects and rain splash. By the end of the lifecycle, infected kernels will have been replaced with sclerotia (the overwintering ergot bodies).

There’s little growers can do for ergot infections once they develop. But, some management strategies can help to reduce the risk of ergot-affected fields. But if ergot is a major issue, producers should talk to their agronomists to determine strategies appropriate for their situation.

Ergot does not typically result in high yield losses, but economic loss due to quality of sample.

Related: Under the Microscope: Ergot on the Rise in Harvest Samples Across the West – Shaun Haney in conversation with Holly Gelech of BioVision Seeds, during the 2011 rise in ergot incidence across western Canada. Note grading standards have changed since then (refer to “In a Sample” below). | More episodes of Under the Microscope 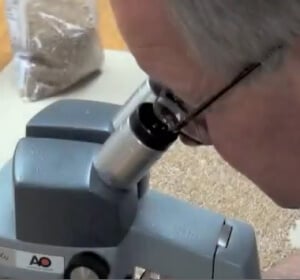 “These grading changes are not only uniform between Eastern and Western Canada, they also ensure Canada’s grain continues to uphold its reputation for quality and safety.” said Elwin Hermanson, chief commissioner, Canadian Grain Commission, at the time of the announcement.

There are two forms of ergotism recognized by the medical community: gangrenous and convulsive. With the former, patients experience nausea and pain in the limbs, with extremeties potentially becoming mummified and lost. In the latter, patients exhibit nervous dysfunction, spasms, painful seizures, hallucinations, mania and/or psychosis. It’s believed that this form is responsible for the outbreaks of “dancing mania” in Europe and the Salem witch trials in 1692.

Mycotoxins present in ergot are dangerous to consume and can prove harmful to handle as well. In this video, David Miller of Carleton University talks about the impact mycotoxins can have on human health, and why producers should handle contaminated grain and hay with cautions.

The Dangers of Working with Mycotoxin-Contaminated Feed 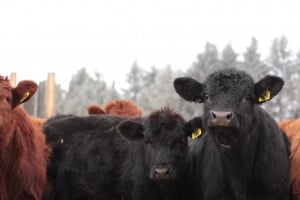 Abortions have been reported in horses and pigs as well, with laying and breeding hens also affected by ergotism. Even in feeds where contamination is sub-lethal, the affects of ergot can be deleterious, causing animals to stop eating, and (especially in horses) lose milk production.

It’s uncertain just how much is too much, as ergot contains numerous alkaloids with varying toxicities.Researchers in western Canada have found symptoms in animals consuming feed with as little as 0.1-0.3% contamination. Where this can be a real problem is in screenings, which are often used to create pellets for livestock feed.

“It’s very interesting; some of our feed companies that put supplements together, they use opportunity feeds like screenings and so on,” Eugene Janzen, professor and assistant dean of clinical studies at the University of Calgary’s Faculty of Veterinary Medicine, told RealAgriculture. “Some of our feed companies actually distributed supplements that were essentially toxic. And we’ve had outbreaks of ergotism in those kind of places.”

Feed companies are just as worried as producers about the affects of ergot poisoning. And many companies are working hard to mitigate any risk of ergot contamination in feed supplies. (See video below, with Amanda Van de Kerckhove)

The Feed Industry’s Challenge with Mycotoxins

The real take-home is the same as dealing with ergot in the field — prevention is key. There’s no cure for ergotism but taking an animal off the ration causing poisoning and dealing with the symptoms present. It’s best to ensure rations contain very little ergot, or — preferably — none at all.

If lodging is the risk, tillers may be the answer