The room was abuzz with the energy of high cattle prices, an informative day of sessions, and the opportunity to dress up for a night of entertainment. There was a white tablecloth, food heaped onto my plate, the offer of an array of drinks a short stroll away, and a group of quasi-strangers set to share a meal together. I guess it was like most conferences in this regard. We were spoiled, really. We always are. But, one thing set this table — and this night — apart from all the other conferences and events I’ve been to: the quasi-strangers were immediately engaged in debate.

I’m not sure where it started, perhaps a joke about gluten-free potatoes or whether or not the beans were organic, but my table hit everything from agvocacy, to conventional agriculture, to biotechnology all before dessert was served. It was really rather incredible to see how much people cared about these issues, and how much our opinions varied even though we each had a role in the business of food and agriculture.

The conversations were probably very similar to what you’ve had with your own families, but one question really stuck out in my mind. When labeling food came up, one of my favourite interrogators asked something along these lines: “If you set aside all of your biases, and had two choices in front of you — organic and “inorganic” food (for lack of a better term) — which would you eat?”

Any activist would have answered the question before said interrogator had finished asking it, but I still don’t know if my response was accurate. It’s a question I contemplate to this day, and especially since hearing the news that both the United States and Canada have approved non-browning, genetically engineered apples for human consumption.


It’s pretty cool technology, this non-browning stuff, offering the consumer (instead of the producer) an answer to a concern, but I wonder if it’s really all that necessary? 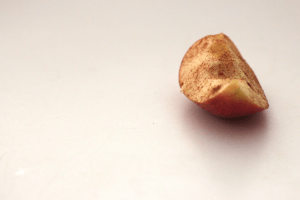 In order to preserve the natural beauty of recently cut apples, I simply spritz on some lemon juice. Occasionally, I’ll sprinkle cinnamon on cut apples. You can also apparently cut and store them in water. Or, just get over the fact that they might brown a little and eat them anyway.

Yeah, some are arguing this could be a great step for food waste. “More kids will certainly eat non-browning apples!”

Will they? Or will they trade their Fruit Rollup for Dunkaroos, chucking the apple in the trash, where it can look as pristine as the plastic that wrapped all of the other great meal ideas.

I guess, in some ways, I’m confused and resentful. The United Nations is struggling to get the message across — 1 billion people go to bed hungry every night, 925 million are undernourished and 1.8 billion people will be living in regions with absolute water scarcity by 2025. And we’re celebrating the use of resources to stop fruit from discolouring.

Why are we spoon feeding those who can already afford to eat (and afford to eat well), when those less fortunate don’t have access to any form of ‘golden’ meal? Why is research looking at ways to improve elitist food, and not address global food security and malnutrition? And what the heck is wrong with my grandma’s advice about lemon juice and cinnamon?

The overfed debate around white tablecloths will continue. People will continue to celebrate apples that haven’t browned nor been contaminated by the zesty flavours of other, acidic fruits.

All I can hope is that I’m wrong, that these apples will encourage less food waste. And perhaps these non-essential, consumer-driven changes will be a true test of the acceptance of biotechnology in the global north, paving way for any form of food-securing technology everywhere else.