Ontario’s 2015 Agri-Food Trade Mission to China (happening this week) is yielding a new business agreement for one of the province’s most iconic edible exports, maple syrup and maple products, says the government of Ontario. 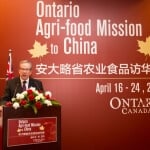 “Maple syrup is one of our province’s oldest traditional agricultural products and we are proud to share this delicious product with the world. This agreement will help open new doors for the sector, building up new markets for Ontario maple syrup and maple products,” says Jeff Leal, Ontario Minister of Agriculture, Food and Rural Affairs.