As expected with lower crop prices, new data from Farm Credit Canada shows the red-hot market for farmland cooled off in 2014. According to FCC’s annual Farmland Values Report released April 13th, the average value of agricultural land in Canada rose by 14.3 percent in 2014 — down from an increase of 22.1 percent in 2013 and a rise of 19.5 percent in 2012.

So which direction is the market for land headed in 2015 and beyond? Recent increases weren’t sustainable — is the market due for a pause to catch its breath? Or perhaps a drop? After the spikes in 2012 and 2013, is land over-valued?

The softening in the market so far has been mainly due to decreased grain prices, but interest rates are the other critical factor determining demand for land. There’s been talk about interest rates climbing for years, but so far, farmers continue to enjoy low borrowing costs. At some point they will move higher, squeezing the bottom lines for highly leveraged farm businesses, which could put more land back on the market.

One way to assess whether land is valued “fairly” is to look at the ratio of farmland price to crop receipts, notes FCC senior economist J.P Gervais in this post.

“While we do not know what an ideal ratio looks like, we can look backwards to see what this ratio has been in the past; potentially gaining insights into current farmland valuation,” he explains.

Using Saskatchewan as an example, he says the 2014 price-to-receipts ratio was 5.8 percent — only slightly higher than the long-term average between 1971 and 2014 of 5.4 percent. For comparison, the ratio of land prices to receipts in Ontario was 19.1 percent — well above the long-term average of 12.4 percent, which Gervais says should be “cause for pause.”

What do you think? Which scenario are you basing your short-term land acquisition/sale decisions on? 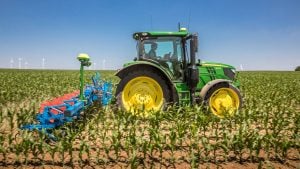 Developed by John Deere and subsidiary Monosem, the AutoTrac Implement Guidance system unveiled at Agritechnica in Germany this year gives farmers the opportunity to mechanically target weeds in row crops, at high speed. The system involves two StarFire satellite receivers (one on the tractor and one on the implement), as well as an AutoTrac vision…Read more »

No deal, so far, on AgriStability enhancements