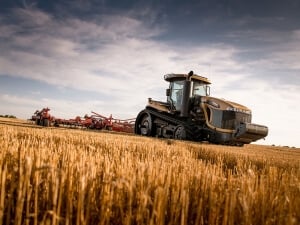 There was a time when it was hard for farmers to access credit — so much so that it spurred the creation of a farm credit corporation, now known as Farm Credit Canada.

As Alfons Weersink, professor of farm production economics at the University of Guelph, points out in the video below, some comparisons can be made between the events leading up to the farm financial crisis in the 80s and the current situation in North American agriculture. Grain prices spiked in the early 70s, and land values subsequently climbed as farmers had little trouble accessing credit — a similar scenario to what we’ve seen over the last decade.

So are we on the verge of another financial crisis in agriculture?

Weersink explains there are several reasons why he doesn’t think that’s the case:

First and foremost, he says farmers’ balance sheets are generally in better shape than they were heading into the 80s.

“Debt levels haven’t increased to the same extent. Net worth has increased significantly in the ag sector. In contrast, in the 70s it did not follow the same route,” he says.

Lending practices have also changed, as he points out farm debt is based more on repayment ability and less on asset values than it was in the 70s. Farmers also have more leasing options, versus sinking large amounts of equity into capital.

A sudden increase in interest rates, as experienced in the early 80s, also isn’t likely, he notes: “People expect interest rates to remain low and relatively stable. Nobody is projecting them to go up significantly any time soon.”

In the last two minutes of the interview, Weersink reviews four other factors he feels will keep the industry from falling into a similar crisis: the availability of more effective risk management strategies; a growing distinction between owner and operator; support programs targeted at ensuring net farm income rather than commodity prices; and the growing heterogeneity of the ag sector.

Of course, crop prices and land values are also part of the discussion.

When you sum up all of those things, are we headed for another farm financial crisis? Watch the interview below, filmed at an ag economics conference in Guelph earlier this week, to find out.

All eyes on Canada in round 6 of NAFTA negotiations