North America’s largest food retailer, Walmart, unveiled its positions on animal welfare and the use of antibiotics in farm animals on Friday. Strangely enough, farm groups and animal rights organizations alike applauded the company’s animal care guidelines. While both sides are welcoming Walmart’s positions, if you dig a bit deeper, there are conflicting views on what the implications will be for animal agriculture. 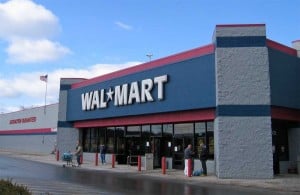 “We have listened to our customers, and are asking our suppliers to engage in improved reporting standards and transparency measures regarding the treatment of farm animals,” said Kathleen McLaughlin, senior vice president for sustainability with Walmart.

In many ways what Walmart is asking of suppliers is similar to the livestock industry’s own expectations and less onerous than targets already laid out by other food and restaurant companies, but the sheer size and symbolism of Walmart’s market share — estimated at approximately a quarter of the U.S. food business — had animal rights groups declaring victory.

“Precisely because it’s Walmart, this is the most definitive statement yet that the era of confining farm animals in cages will come to an end,” stated Wayne Pacelle, president and CEO of the Humane Society of the United States (HSUS.)

The president of Mercy for Animals, Nathan Runkle, called it “a historic and landmark day.”

The president of the National Cattlemen’s Beef Association echoed the stance of his pork industry counterpart.

“Walmart has recognized programs the beef industry has already embraced — this is how we’ve raised cattle for generations,” said Philip Ellis. “That is why we support and stand behind the animal welfare and handling guidelines found in the Beef Quality Assurance program, including the Judicious Use of Antimicrobials in Cattle. We encourage Walmart, and others, to work with us going forward in transparency around these tools for cattle health.”

So animal rights groups and news headlines are saying Walmart’s policy is a “game changer” and will “change the way millions of farm animals are treated,” while the organizations representing producers who raise the animals say Walmart is simply acknowledging what’s already happening on many farms. If those sound like conflicting statements, that’s because they are.

Could it be that HSUS and Mercy for Animals are spinning the announcement to make it appear to supporters that years of campaigning have paid off — to make it look like they’ve convinced the largest company in the world to share their view? Or is the animal ag sector downplaying the amount of change that will have to occur to keep Walmart happy?

In reality, how much will change as a result of Walmart laying out its positions?

If it wasn’t Walmart, the epitome of American consumerism, it’s doubtful the animal activist groups would be satisfied with the expectations and the absence of mandatory timelines. After all, many livestock industry groups themselves have similar plans laid out for their producers. There’s nothing in Walmart’s list of expectations that wasn’t already on their radar.

In that sense, it won’t amount to major change, but just because something is written into an “industry sustainability plan” doesn’t mean the practices have been implemented on every farm. Whether it’s sow stalls or pain management, there will have to be changes, but farmers are much closer to meeting Walmart’s expectations than some people would have the public believe.

A summary of what Walmart is asking of its suppliers: In the area of animal care, the company says it will base its expectations on the “Five Freedoms” as defined by the World Organization for Animal Health. Suppliers to Walmart U.S. and Sam’s Club stores will be asked to: