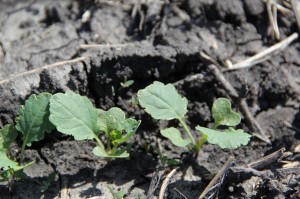 Do you know how many of your canola seeds turned into viable plants?

Frost damage, weeds and insect pests aren’t the only things to look for in canola fields as the plants pop out of the ground. Seed survival should also be assessed, emphasizes Angela Brackenreed, agronomy specialist with the Canola Council of Canada in this Canola School episode.

“When we’re determining our seeding rates it’s really tough to put a number to that percent survivability,” she explains. “We encourage guys to get out two to three weeks after seeding and put a number to it.”

Survivability can range from 40 percent up to 75 percent — “That can make a humongous difference in what your seeding rate should be in shooting for that 7 to 10 plants per square foot,” notes Brackenreed.

Whether it’s frost or poor seed survival, the Canola Council says an established canola stand with as few as 1-2 plants per square foot generally has higher economic potential than a reseeded crop (there are some exceptions.) As explained in this CanolaWatch article, a stand with less than 5 plants per square foot will not reach maximum yield potential, but an early thin stand typically has greater economic potential than a field planted in mid-to-late June.