Resistance to clubroot disease in canola is deteriorating across Alberta, according to research conducted by Alberta Agriculture and the University of Alberta. Multiple pathotypes are now suspected to be responsible for infecting canola varieties that were previously deemed resistant to the soil-borne disease. 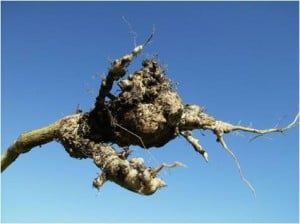 The presence of a different clubroot pathotype that could infect resistant varieties was confirmed in a field near Edmonton by Dr. Stephen Strelkov from the U of A in early 2014. Since then, Alberta Agriculture, the Canola Council of Canada and the U of A have identified clubroot pathotypes capable of causing high levels of disease in resistant varieties in 16 of 27 fields across Alberta. The CCC says the pathogen found on many of these fields was virulent on all clubroot resistant cultivars.

“These new fields aren’t clustered around the original location of resistance breakdown. They are hundreds of kilometres apart and throughout the clubroot infested areas of the province,” explained Dan Orchard, agronomy specialist and clubroot lead with the CCC in a release on Friday. “We need to continue to focus on both minimizing the spread of these new pathotypes and the buildup of resting spores in all fields.”

Clubroot-infested soil on equipment is the main mechanism for the spread of clubroot spores, so he reminded growers that sanitizing equipment during all field operations is recommended.

“Preventing the buildup of resistant spores is best managed through longer rotations and the use of resistant varieties,” said Orchard. “If growers wait for clubroot to show up before choosing resistant varieties, the selection pressure for new virulent pathotypes is literally millions of times higher than if growers begin using these varieties before the disease shows up.”

Alberta Agriculture and the U of A will continue surveying for the new clubroot pathotypes. Work has also started on developing a research program to evaluate and characterize these pathotypes.

The best time to scout for clubroot is late in the season, approximately two weeks before swathing, when root galls should be easy to identify, notes the Canola Council. Soil sampling can be conducted at any time of year to test if the clubroot pathogen is present.

Check out these links for earlier stories on the breakdown of clubroot resistance, scouting for clubroot and minimizing the spread of the disease: