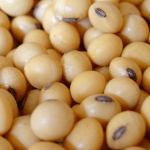 Southern Manitoba has the right combination of soybean production and soybean meal demand to support a 2,000 tonne per day soybean crushing facility, according to a new report funded by the Canada and Manitoba governments and soybean industry partners.

Manitoba Pulse and Soybean Growers partnered with Soy 20/20 to organize and co-fund the study, which was conducted by Mercantile Consulting Venture.

“The goal of the study was to see if there are enough soybeans already produced in Western Canada and Manitoba specifically to justify a facility, as well as what the potential was for marketing of the meal here in Western Canada,” explains Francois Labelle, MPSG’s executive director, in the interview below. (story continues)

On the supply side, soybean acreage has expanded rapidly on the eastern prairies in recent years, with most of the soybeans destined for processing in the U.S and China. Approximately 18 percent of Canada’s soybeans last year were grown in Manitoba, and yet there are currently no large crush facilities in Western Canada.

Demand for the meal would mainly come from the hog and poultry sectors within the province.

As Labelle explains, there were a number of companies interested in seeing the results of the study.

“This study is a starting point for any of the companies that are interested. There will be a lot more analysis required, but we hope to get some interest from commercials that might be interested,” he says.

The economics of the operation could be further improved by also crushing canola.. To maximize margins, the report recommends constructing a swing plant that could process both oilseeds.

CropWeek 2010 – The Powerful Impact of Inoculants