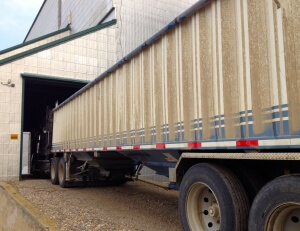 Canadian wheat sales into the U.S. have grown since the end of the Canadian Wheat Board monopoly in 2012, but there are still obstacles for American wheat growers interested in marketing their crop north of the border.

Under the Canada Grains Act, as it stands right now, U.S. wheat delivered to Canadian elevators automatically receives the lowest grade in its particular class.

“There has been, for quite a long time, concerns from the U.S. industry that there isn’t equivalent access between Canada and the U.S. Access within Canada is restricted while Canadian producers have free access to U.S. markets,” explains Cam Dahl of Cereals Canada in the interview below.

Some of those concerns would be addressed if Bill C-48 — federal legislation introduced last December — becomes law, he notes. (continued below)

C-48 includes amendments to the Canada Grain Act that would make U.S. wheat eligible for the highest possible grade, as long as the variety is registered in Canada. However, with a federal election looming in fall, and the grain legislation not viewed as the highest of priorities, it’s increasingly unlikely C-48 will receive parliamentary approval.

“It might be faint hope, but I’m still holding out hope (that C-48 will be passed),” he says. “We will be working as an industry with the Government of Canada after October 19th if the bill isn’t passed to bring it back.”

Following the World Trade Organization’s recent ruling against the U.S. and its country of origin labeling rules, American wheat groups have compared Canada’s wheat classification and variety registration systems to COOL, arguing the value of American wheat is discounted based on its origin.