The number of flax acres in Western Canada will likely be up this year, but it’s looking like it might not be as high as many analysts and people in the flax industry were expecting.

According to Statistics Canada’s planting intentions report released last month, farmers in Western Canada are planting 1.63 million acres of flax, the largest flax acreage since 2009, but only a five percent increase over last year. As Don Kerr, president of the Flax Council of Canada, explains in the video below, there were expectations of a 15 percent increase in 2015. 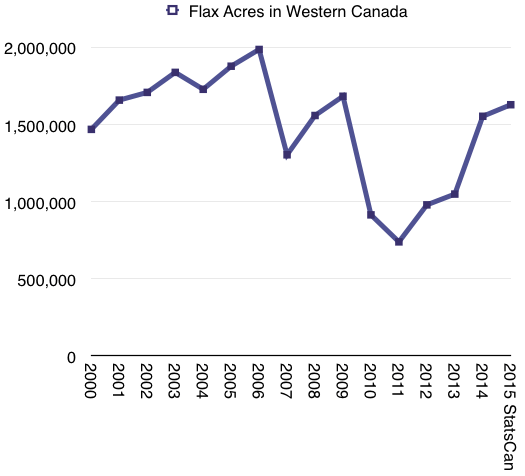 “1.7 to 1.75 million was a target in most peoples’ mind,” he says. “I think the trade in general thinks we should see higher numbers because the price of flaxseed is very good in the country right now. It’s been holding its own.”

Kerr notes there have been many positive developments on the demand side for flax — substantial growth in exports to China and health claims included — since the flax industry was hit by the Triffid crisis and the closure of the European market in 2009. However, he acknowledges agronomic challenges still need to be overcome before growers will seed more flax. If StatsCan is correct in projecting only a 5 percent increase, Kerr believes it’s due to challenges in the field and stagnant yields — not poor prices.

“It’s very important we look at agronomic research to improve yields and yield stability. That’s something that has been lagging. Over the past five years we’ve had to relegate that to second place in terms of what we’ve had to do in damage control, just to try to restore the integrity of our system,” he says.

Kerr discusses flax acres, growth in export markets and what the Flax Council is doing to boost yields and acres: