Wheat futures have dropped sharply this week after spiking earlier this month, as the rising U.S. dollar is once again weighing on American commodities.

The currency effect is also being noticed in the oilseed complex, as Canadian canola futures have climbed while soybean values in Chicago have fallen over the last few weeks.

Get the latest prices on the Commodity Futures Dashboard

As part of this interview, Brian Voth, senior market coach with Agri-Trend Marketing, discusses what’s been happening in the markets during the busy seeding season. (continued below)

As he explains, the slide in the wheat futures this week is related to the rising US dollar index.

Canola, meanwhile, is trending higher, with November futures trading as high as they’ve been in the last year. At the same time November soybeans have dropped fifty cents a bushel in the last two weeks.

“It’s the polar opposite of what we had last year, when we had the tightest soybean carryout in U.S. history and a massive canola carryout. Now we’re starting to see things come the other way,” notes Voth, pointing to new canola ending stock estimates from AAFC last week of less than a million tonnes this year and only 500 thousand at the end of the 2015-16 crop year.

Wheat and soybean values aren’t the only things dropping due to the higher U.S. dollar. The relative value of the Canadian dollar has inherently also declined, and is back down around 80 cents U.S.

“It looks like we’re ready to drop back into that range that we saw from January into April, trading about 78 to 80 1/2 cents,” he says. “I don’t expect it to go below that level.”

Finally, according to the Statistics Canada planting intentions report released in April, Canadian farmers were going to increase their oat acres by a whopping 30 percent over last year. Voth suggests actual oat acres will likely be smaller as the report and market’s reaction may have scared some growers who were on the fence about seeding oats. 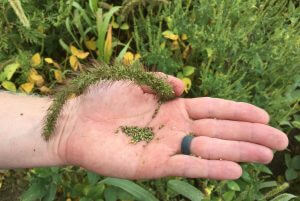 Resistance Management School: How to test for herbicide resistance

There are a number of reasons why herbicides sometimes fail to control weeds. Perhaps surprisingly, one of the easier things to rule out is whether the weed is herbicide resistant. Ontario Ministry of Agriculture, Food and Rural Affairs weed specialist Mike Cowbrough says many universities across Canada conduct testing for herbicide resistance, but growers have…Read more »

Will heavy carryout keep a lid on grain prices? – This week in the grain markets

Finally, the end of a tumultuous quarter — This week in the grain markets