Grain markets pulled back from their hot start to the week with only canola finishing in the green, its July contract climbing to close the week at $463.20/metric tonne, thanks to a stronger U.S. dollar. Wheat and corn prices did have a hot start to the week because of concerns of sub-zero temperatures and a depreciating U.S. dollar. However, the Greenback has rebounded a bit (as mentioned, supportive of canola prices) and traders seemed content with the amount of short positions that they covered. When the short positions were flying out the door though, wheat made daily gains of in the four-to-seven per cent levels for three straight sessions.

Corn sort of followed the wheat market higher but pulled back with evidence that the number of acres seeded already continues to remain well ahead of schedule. Soybeans are charting their our path as most of the market still believes there are lots of American, Brazilian, & especially Argentinian beans out there. Other bullish headlines included more acres getting re-planted because of cold weather and significant rainfall in the U.S. southern plains affecting winter wheat crops. Ultimately, the negative weather in the middle of May made a lot of headlines, but the good news is most early agronomy reports in Western Canada agree that only the earliest of crops were affected.

The Canadian ag ministry came out with their expectations for production and Canadian grain ending stocks, and the big item of note was their expectation for canola inventories to fall to 500,000 million tonnes by the end of 2015/16, compared to this year’s carryout of 1.4 million tonnes. The half-million level would be the lowest since 1997/98 when we were harvesting almost half of what we do now, but the difference is demand has grown with our yields. These numbers come off Agriculture and Agri-Food Canada’s forecast of 19.4 million acres getting seeded this year, which would produce 14.93 million tonnes.

The agency did increase its price forecast to $450-$490 over the next year, still below the $500/MT price we said in May 2014 that we wouldn’t see for another year, maybe two. We could see it sometime during 2015/16 if less acres go in, more fields have to be re-planted, or we have serious production issues this year, but my feeling is we won’t see a $500/MT handle before the end of 2015. On that note, there are some dry pockets along the U.S.-Canadian border that could use some rains, but when it comes to the big picture, the market isn’t super concerned at this point as it’s nothing a few beer clouds wouldn’t take care of.

That said, AccuWeather is forecasting a warmer summer for the Canadian Prairies, especially southern Alberta where temperatures are forecasted to be 1-1.5 degrees Celsius above average. According to the forecast, the Prairies should see some of its hottest weather during the front half of July, versus the usual late July-early August timeframe. Conversely, precipitation in the western Prairies should be adequate thanks to thunderstorm activity but AccuWeather says Manitoba is looking drier.

Across the 49th parallel, the National Oceanic and Atmospheric Administration is following other El Nino-predicting meteorologists in Japan and Australia, calling for normal temperatures but above-average precipitation in the U.S. Midwest, while the West Coast will continue to be dry. With that type of weather, it’s very possible that we see above trend yields for the cornbelt, but any weather event would likely create one-off selling opportunities. Long-range forecasts are showing some drier conditions for major wheat growing regions in Australia, Canada, & Russia.

Speaking of Russia, the recent removal of their wheat export tax is opening up the gates to what looks like an additional two million tonnes of wheat getting shipped out before the end of the crop year. On that note, the Russian ag ministry noted that since the export tax was implemented on February 1, Mother Russia’s wheat exports were down 60% from the same period last year at just 1.61M tonnes.

Nonetheless, exports for the marketing-year-to-date are up 16% year-over-year at 20.08 million tonnes, with most market analysts expecting that final number to be somewhere closer to 21.5 million. Could we see the Russian wheat export tax come back? Possibly, especially if spring seeding remains behind schedule and the forecast for dry weather over the next two-to-five weeks is realized, which is not a make-or-break time for the crop’s development, but would adversely affect growth. 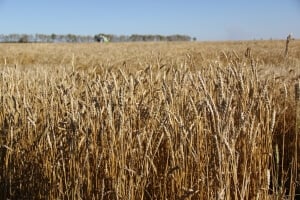 We’re hitting that time of year in the global production cycle where we know a fair amount about the wheat crop. Winter yields are fairly known after a few crop tours (though there will likely be some revisions after the past few weeks of rain in the US southern plains) and emergence of the spring crops are giving us a pretty good idea of what the crop could look like.

There is a lot of growing season yet to come and my thinking is that dry El Nino weather affecting the Pacific Rim region (Australia, Southeast Asia, & Argentina) is likely the biggest catalyst for any price swing. Should you bet the farm on this happening? No. But expectations are for a bit of a sideways trade over the next few weeks in the wheat market as we figure out the damage from the rains on U.S. winter wheat crops and if dryness materializes in Eastern Europe, and then we can focus our attention on El Nino.

Overall, continued improvements in crop progress will put pressure on any continuation of rallies, meaning selling opportunities will likely be short-lived. The best commodity news that I’ve seen in the last week came from the consumer side: bacon prices are down 25 per cent from last year – maybe time for a Costco run!

Where does the spring wheat rally go from here?

Acreage Shifts, Feed Supplies, and Shipping Lanes – This Week in the Grain Markets

Usual or Unusual Grain Markets? — This week in the grain markets