Seeding equipment manufacturer Bourgault Industries and Agriculture and Agri-Food Canada say they have resolved a dispute over fertilizer placement research done over a decade ago. The disagreement revolved around the interpretation of the results of a study conducted by the Prairie Agricultural Machinery Institute, AAFC and the University of Saskatchewan from 2000 to 2002. The project looked at agronomic differences between side banding and mid row banding of nitrogen fertilizer during seeding. 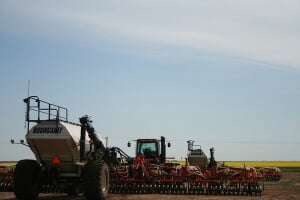 After failing to resolve their differences out of court, Bourgault filed a statement of claim against Agriculture Canada and PAMI in February of 2008. The lawsuit was filed in response to news articles published in 2006 in the Prairie Steward and Western Producer that included information Bourgault believed was “untrue, inaccurate and was thus damaging to Bourgault’s reputation and products.”

According to a “Joint Information Notice” issued by both AAFC and Bourgault on Tuesday, the news reports indicated the PAMI study had shown no agronomic differences between side-banding and mid row banding. The Prairie Steward article purportedly also said that mid row banding could deny access to nitrogen in dry conditions.

Bourgault disagreed with both these points, arguing the study showed performance differences in dry soil, and that mid row banding only denies access to nitrogen when the equipment is improperly set. Furthermore, Bourgault took the position that by minimizing soil disturbance in the seedbed, a mid row banding system preserves moisture for improved germination in dry situations.

Both AAFC and Bourgault now say they agree that “side band systems have higher seedbed disturbance compared with mid row band systems, and that under dry conditions, this has the potential to reduce or delay crop emergence or reduce yield. This underscores the importance of proper seed placement and suggests that the higher seedbed disturbance inherent to side band openers may at times prevent good placement and lead to increased seedbed drying.”

PAMI is also issuing a “finalized” research update noting that the stranding of the nitrogen in dry soil can be prevented by setting the mid row banding system to operate in moist soil.

Read the entire notice from Bourgault and AAFC here.

Get the latest machinery news delivered to your inbox — sign up for RealAg’s Machinery Update.

Clubroot Symptoms Found in Manitoba: What Can Farmers Do?

Versatility, capability, and comfort is the name of the game with Fendt's line up off the 700 Vario Series. The tractors, which were on display at the Farm Progress Show at Boone, Iowa, range in horsepower from 203 to 283 and can be a great fit for farmers of different operations including row crops, hobby…