After coping with excess moisture in many instances over the last few years, farmers in much of Western Canada are suffering from a case of “weather whiplash,” as Dave Phillips, veteran meteorologist with Environment Canada, has termed it.

Much of the west has received less than 60 percent of average precipitation this growing season, with some areas breaking records for lowest rainfall amounts. A high pressure ridge sitting over the prairies is to blame, as it’s diverting precipitation to the north and south, resulting in poorly germinated crops, stunted pasture growth, forest fires and smoky skies in parts of Alberta, Saskatchewan and Manitoba and even as far south as Kansas.

“What has really stood out for me is the contrast between last year and this year,” says Phillips in the above interview. “It’s almost going from too much weather to no weather. That’s essentially what we’ve seen.” (continued below map) 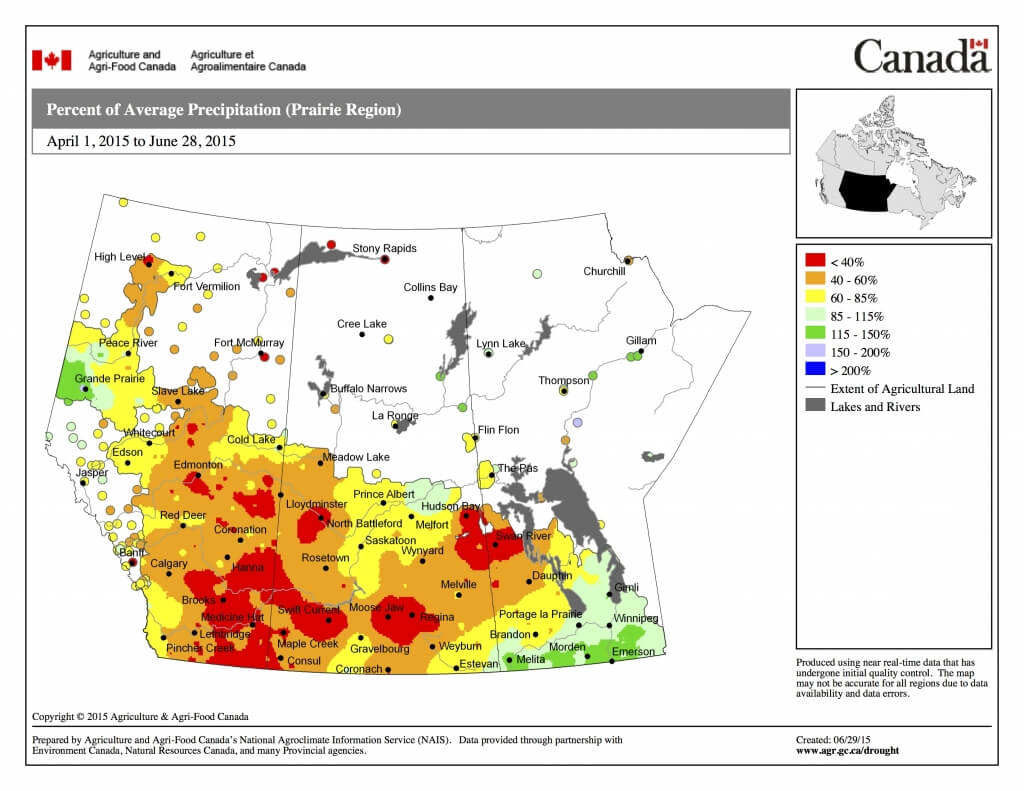 He cites numerous examples of how the tap over the prairies has been turned off: last year, Regina received 200 millimetres of rain in June. This year — 14 millimetres going into the final day of the month.

“These are the kinds of things you might see in 50 years of farming. Not back-to-back,” says Phillips.

The lowest recorded total precipitation in Saskatoon for March through June dating back to the 1800s is 60 millimetres. As of the morning of June 30th, Saskatoon had received around 40 millimetres in that period: “They would need a gully-washer (on the last day) just to deny the record of this being the driest spring on record,” he says.

And it dates back further than March, as Phillips explains “when we look at winter and spring, this has been the driest winter-spring on record across the prairies in 68 years of observations. That is a headshaker.”

So the big question: is there any end in sight? Will parched regions of Saskatchewan and Alberta receive, as he describes it, “the kind of rain that would spoil your holidays, where you’d be playing Scrabble or video games — a slow, drenching, percolating rain that would last three or four days”?

(This is where you should stop reading and find the Scrabble board if you were expecting good news.)

“I’d love to be able to say that I have some good news, but it isn’t good,” he says. “The problem is this: if we’re wrong, then everybody is wrong. All of the models, the European models, the American models, the private agency models, Environment Canada models, are saying the same thing. That is, warm and dry across the prairies for July, August and into September.”

RealAg Radio, May 12: Checking in with farmers across the country on crop progress