The soil beneath our feet is teeming with organisms, each with an incredibly important role in the pedosphere. Among the organisms is a group commonly referred to as earthworms (from the phylum Annelida).

(video on earthworm scouting is at the end of this post)

Though a few species are said to remain from the last ice age, most of the earthworms found in Canada are actually invaders (likely introduced from Europe when ships carried soil ballast or pioneers brought plants bearing soil over). For the most part, these invaders do a pretty bang-up job of improving the soil in non-forested areas, and are revered in agricultural communities as indicators of soil health. 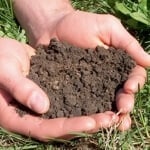 Gaining Ground: Digging Deep on the Impacts of Tillage

It’s a Jungle Down There! A List of What Lives in Soil

Earthworms contribute to arable soils by:

Charles Darwin, from EarthwormsThe plough is one of the most ancient and most valuable of mans inventions; but long before he existed the land was in fact regularly ploughed, and still continues to be thus ploughed by earth-worms. It may be doubted whether there are many other animals which have played so important a part in the history of the world, as have these lowly organised creatures.”

If your crop land has a good earthworm population, you should be able to see 4-5 middens between your feet, if they’re shoulder width apart, says Anne Verhallen, soil management specialist with Ontario Ministry of Agriculture, Food and Rural Affairs. Middens are a mixture of plant residues and worm droppings that often cover the mouths of earthworm burrows. Their function isn’t completely understood, but most scientists agree they provide food and shelter for the earthworms, while possibly also mitigating the risk of predation. …continues below video

If you’re not terribly impressed with the earthworm populations on your farm, there are a few things you can do to increase their numbers, including:

4 Ways to Extend the Grazing Season in Ontario