Elizabeth Homerosky, doctor of  veterinary medicine and Simpson Ranch Fellow at the University of Calgary, is looking at developing a scoring system that might enable producers to predict a calf’s ability to consume colostrum on its own, in a timely manner.

So far, the data seems to point in a rather unsurprising direction: suckling reflex. Homerosky told delegates of the 2015 UCVM Beef Cattle Conference that data gathered from a cow-calf ranch near Calgary show that, calves with a weak suckling reflex are 83x less likely to suck on their own than those with a strong relex. She’s also comparing other indicators of vigour, such as gum colour, tongue appearance and the calf’s reaction to having its nose prickled and its tongue pinched.

By next year, Homerosky hopes to be able to present a combination of the key parameters ranchers should assess after delivery. 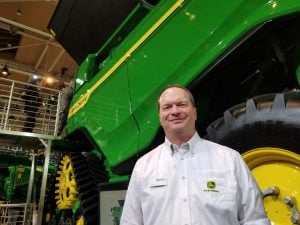 RealAgriculture’s coverage of Agritechnica 2019 is made possible by Brevant seeds. The latest technology, locally tested. Brevant seeds. Seed. Yield. Easy. Day one of Agritechnica featured a big reveal for the show. With test machines ready to hit the field in the fall of 2020, John Deere unveiled its X series combine. The X series a twin…Read more »

Beef Market Update – Will 2012 Be Great For the Rancher and the Cattle Feeder?