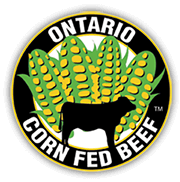 Following the May 1st launch of Ontario Corn Fed Beef at 33 Kinsho Stores throughout the Osaka Japan market, a delegation of guests, including retail and distribution partners from Japan, are touring Ontario beef farms and packing plants to gain “a deeper understanding of just what this brand means.”

Initial feedback of the product has been very positive and there is an expectation for significant and rapid growth, says Jim Clark, Executive Director, Ontario Cattle Feeders Association (OCFA).

In 2014, Canadian Beef exports to Japan were valued at over $103 million. The growth potential for the Ontario Corn Fed Beef brand in the Japanese market is estimated at more than $15 million annually, says the OCFA.  The incremental value that is generated by developing this key export market directly supports over 1500 jobs in the meat-processing sector in Ontario alone.”

The Ontario Corn-Fed Beef program was launched in June of 2001 to expand the market for and profile of Ontario-produced beef, and is currently featured in 241 Loblaw Co. and affiliate stores and 120 other retail outlets across Ontario and distributed to restaurants through Sysco Canada and Morton’s Wholesale. The program has grown into one of the largest producer-owned branded beef programs in Canada; it produced 298,760 head of certified cattle in 2014.

Is this the New Normal Size of the Canadian Cow Herd? — Brian Perillat, Canfax

No Compressor or Hoses for Cordless Fence Stapler