Boron’s complete role in plant health is not entirely understood, but the nutrient does play a key role in cell elongation, hormone response and membrane function. Boron is a micronutrient necessary for optimal yield and growth, but needed in only very small quantities.

In Western Canada, trials surrounding boron have shown inconsistencies in yield response, and this year, the Canola Council of Canada (CCC) is doing some of its own work on the nutrient, through the Ultimate Canola Challenge. 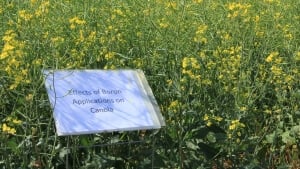 In this Canola School episode, RealAgriculture’s Debra Murphy met up with the CCC’s Nicole Philp to talk about the work CCC is doing on a small plot and field-scale basis. Philp says there are 18 field scale sites in Western Canada, and three treatment options at two stages in the small plot trials.

Interested in getting involved? You can get in touch with your Canola Council agronomist about participating in the Ultimate Canola Challenge (Check out the UCC 2015 Small Plot Protocol here).

Or check out the audio options below.