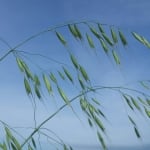 Weed scientists in Western Canada and the U.S. Northern Plains are keeping an eye out for signs of glyphosate resistance in one of the most widespread weeds in the region.

Wild oats, which is commonly resistant to other herbicide modes-of-action, could be the next weed to adapt to glyphosate, according to a risk assessment model developed by Hugh Beckie of Agriculture and Agri-Food Canada.

There have been several suspected cases of glyphosate resistance in wild oats in North Dakota and Minnesota, however further testing has all come back negative, explains Kirk Howatt of North Dakota State University in this video filmed at the NDSU Langdon Field Day last week.

“In the greenhouse work we’ve done with them so far, they are not any different from the susceptibles we have in our seed lots,” he says.

Glyphosate-resistant kochia has already been found in all three prairie provinces, while waterhemp, common ragweed giant ragweed and marestail are also on the GR weed list in North Dakota and Minnesota. Howatt points out wild oats would be the first example of a grassy weed showing resistance to glyphosate in the region, which would further complicate weed control.

“If we have a grass that becomes resistant, then in addition to the glyphosate, which (producers) are still probably going to want to use, and a little broadleaf product for those other plants, they’ll have to put in an additional product for wild oat control. It becomes a very expensive herbicide program,” he notes.