Unless you’ve been living under a rock, you’ll know that talk of changes to (elimination of?) supply management in Canada has recently heated up. Of particular note, delegates, politicians and the like are gathering in Hawaii right now to further hammer out details regarding a giant, international trade deal — the Trans Pacific Partnership (TPP). 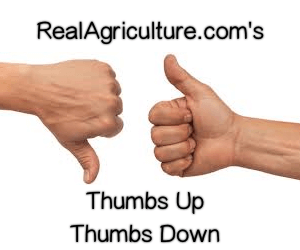 Interested parties (read: the U.S.) are demanding that Canada’s admission to the TPP is simple — it requires access to Canuck dairy, poultry and egg markets. Debates around the TPP have further deepened entrenched battle lines within Canadian agriculture markets — pitting the export dependent vs. the domestic market once again.

Which brings us to this week’s Thumbs up, Thumbs down question. (It’s a new weekly feature here at RealAgriculture. Suggestions for future topics are welcome!)

If (and we’re not saying it is) the ticket price to get in on the TPP ride is supply management, should Canada pay up?

Have your say, and leave your reasons in the comments, if you’d like.

@RealAg_Debra @realag_lyndsey 3 ?’s Specifically what do we gain How will we deal with future COOL shenanigans How will SM be dismantled

@realag_lyndsey I would rephrase the question to ask, a greater cost to whom? if it is to give consumers greater choice for less, I say yes

Both MacAulay and Perdue need to step up for agriculture

How trade is an important part of a resilient local economy