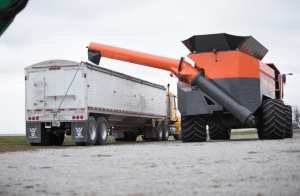 It’s been described as the first major innovation in harvester design since the first half of the 20th century when binders and threshing machines were joined to form “combines.” Now the company behind the unique design is planning to begin production of these units in early 2016.

The “Tribine” harvester adds a grain cart component to the traditional combine design, along with articulated steering and four-wheel drive. The front half of the unit is made from an AGCO Gleaner S77 combine, with its grain tank removed, while the rear module is essentially a 1,000 bushel grain cart that can unload at 500 bushels per minute.

The city council in Newton, Kansas last week approved the construction of the first Tribine harvester assembly plant, which the company says puts them on track to begin assembly operations in January of 2016.

A prototype of the harvester, which was designed by Indiana farmer Ben Dillon, first attracted farmers’ attention in 2013 when it was displayed at the Ag Connect Expo in Kansas City.

What do you think? Would adding more grain-carrying capacity make harvest operations more efficient? Feel free to share your thoughts in the comment section below.

Use Your Combine as a Fusarium Mangement Tool

Combine capacity, operator comfort, and the move to seed green — a LIVE! Q&A with Torey Hadland