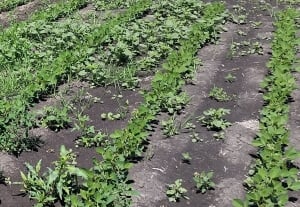 Soybean growers could soon have access to a new tool for weed control as plans are in place to introduce varieties that are tolerant to both dicamba and glyphosate to North America in the next year or two.

Dicamba tolerance will be valuable in giving farmers the ability to use multiple modes of action for weed control, particularly in fields with glyphosate-resistant weeds, says Drew Thompson, field biologist/technical development specialist with BASF, in this Soybean School episode.

“We have numerous weeds in Ontario that are resistant to glyphosate and so that powerful tool that farmers had has been removed from their toolbox. We think this dicamba is going to help replace it,” he explains. “It has a good fit in a lot of situations.”

In the video below, Thompson walks us through some research plots containing glyphosate-resistant Canada fleabane, comparing efficacy between different herbicide combinations and rates. Dicamba is effective at controlling broadleaf weeds, but as he shows, grassy weeds may still be a problem.

“Even at that 2x rate, it’s not providing the grass control. It’s doing a great job on the fleabane, which was our main one, but we also start to see there are some other things popping up that make us think this isn’t a standalone product that will do it all by itself,” he says.

Thompson joins Bernard Tobin to discusses how dicamba tolerance will fit into weed management plans, and the options it will give farmers:

Stay tuned for a follow-up Soybean School episode with Dr. Peter Sikkema of the University of Guelph explaining the path of glyphosate-resistant weeds and how we can try to avoid the same mistake with dicamba.

Related: Monsanto “Confident” Dicamba-Tolerant Soybeans Will Be Introduced in 2016