“What comes out of the back end of a combine has a direct impact on the success of your seeding operation in the spring,” says Trevor Thiessen, president of Redekop Manufacturing. “What we’re trying to do is makes sure that as a farmer leaves that field in the fall, he’s prepared his land for the spring seeding season.” 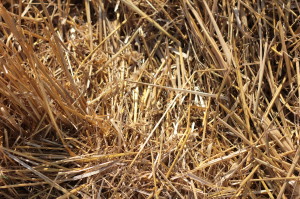 Redekop Manufacturing is located on the outskirts of Saskatoon, and designs and manufactures harvest technologies, specifically focusing on residue management. Much of their work deals with operators and combine developers trying to evenly spread chaff and straw over 35′.

“The primary benefit that we have is through our patented technology, which is called MAV — Maximum Air Velocity,” says Thiessen.

Check out more of our coverage of Canada’s Farm Progress Show ’15!

MAV uses separate zones for cutting and spreading. The cutting zone is made up of a rotor with 4 rows of blades mounted in pairs, and an optional counterknife. The spreading zone, located on both sides of the cutting zone, uses shrouds to around six fan blades to generate high-velocity air that reaches speeds of over 90mph. The combination is capable of spreading crop residue up to 45′.