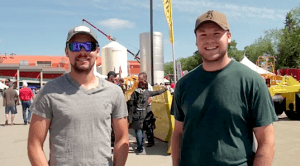 Dry conditions back home were the subject of many conversations involving prairie farmers who made the trek to Regina last month for Canada’s Farm Progress Show.

RealAg’s roving reporter Kelvin Heppner took to the show grounds with a camera to ask farmers how their crops were looking and their highlights from the massive equipment showcase.

Two points need to be taken into consideration when listening to their responses:

1.) Farmers from areas hardest hit by drought tended to say “no thanks” (perhaps in more colourful language) when asked if they’d be up for doing an interview that would include a question about how their crops were looking.

2.) It’s not uncommon to see multiple generations from a farm touring the show together (ie. father and son/daughter.) In every one of these cases, dad delegated the interview to the younger generation. So while these interviews may skew toward younger farmers, there’s usually a senior decision-maker behind the camera.

Talking to Farmers: What Do You Think of the CWB Steamroller Campaign?

Selling hay to the UAE: Challenges and Opportunities

By Christina Franc Canada exports 600,000 tonnes of forage each year, with an estimated value of $150 million. This market is continuing to grow, particularly in the United Arab Emirates. Selling hay to the UAE opens a world of possibilities, and a world of possible problems, says Alan Gardner of Haydar Group of Companies. None…