Grain markets this week were about 2-3% lower on the front-month contracts as weather/growing conditions have improved, slowing down the running of the grain bulls (especially since there aren’t any demand headlines for them to chase after). 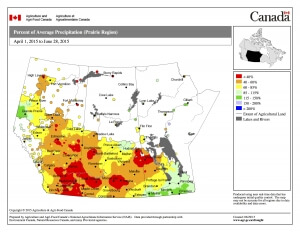 And it’s no wonder the bulls need a breather. Between abundant rains in the Midwest, dry weather in Western Canada & Europe, geopolitical risk in the EU with Greece, the Chinese stock market crashing, and the increased chatter around El Nino, there’s been a lot on the go! With this chatter starting to subside a bit though, the market can only turn its focus back on weather now.

Now that we’re into the second half of July, crop production potential is becoming clearer in the Northern Hemisphere. The effect of all that rain in the Midwest in June is starting to show its face in the form of disease. Meanwhile, the dry weather in Western Canada remains notable despite rain finally falling in a few areas.

Yield numbers in Europe continue to push lower as the European Union is feeling the heat (and I’m speaking about weather here, not because of the Greek debt bailout situation, although that still remains a headache). Strategie Grains cut their forecast for the European wheat crop for the second time in two months, a total downgrade of 1.8 million tonnes (MT) to 140.9 MT. Comparably, the E.U.’s farmer’s union, Copa-Cogeca, says yields are definitely down this year thanks to the volatile weather, limited access to efficient pesticides, and effects of the ban on neonicotinoid seed treatments. 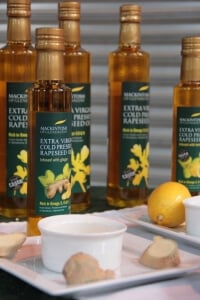 Regions of notable concern include parts of Germany, France, Poland, & Spain, and with another heatwave in the forecast (right at the moment that the harvest in these areas are picking up pace), the numbers may drop again. One of the crops to see the biggest declines is rapeseed production, likely down almost 11% from last year’s massive 24.3 MT crop. But, “massive” is the key word here – last year’s production in Europe was one of the biggest across the board and while this year’s crop may be “poor” relative to last year, it’s still decent compared to the average over the past few years.

Staying in Europe, the Black Sea continues to prove that they are selling the cheapest wheat in the world, with Romania & Russia selling 120,000 MT each to Egypt this for an average delivered sale price of $210.38/MT USD. With harvest starting to ramp up in the region, Black Sea grain originators are looking to move the stocks they still have on the books as new crop comes onto the balance sheet.

A lot of questions remain as to how much effect the Kremlin’s wheat export tax could slow shipments out of Mother Russia. That being said, there are rumours that Russian wheat is being sold into Brazilian markets, something that likely won’t make the Argentinians or Americans happy as those two have been Brazil’s main suppliers in the last two years.

Coming back to North America, since we’ve seen corn and soybeans pop above $4 and $10, respectively, most American farmers have made the sales that they want to and are now holding on until the next rally. One could argue that similar sales have been made on this side of the 49th parallel with canola over $12 on the Winnipeg ICE futures board. This has been helped by the U.S. dollar continuing to strengthen against the rest of the world as the American economy seems to be standing stronger than most other economic leaders. 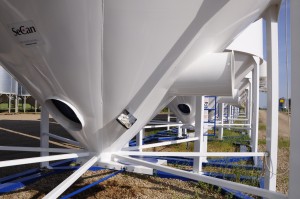 On Wednesday, the Bank of Canada dropped the benchmark interest rate by 25 points to 0.5%, signalling to the word that the decline of commodity prices, namely oil, are having a longer-term effect than initially thought. The Canadian Loonie literally dropped a full cent after the announcement and on Friday, it traded below $0.77 USD for the first time since March 2009.

Overall, the market will look for new headlines to chase prices higher on, while most growers wait to crops to fill out. Barring another 4 weeks of monsoons in the Midwest & drought conditions in Western Canada, the argument can definitely be made that the crops most easily accessible (i.e, wheat, corn, soybeans, & even canola) could be near their highs for the next six months.

In reality, any one can argue that it’s going this way or that because there are a lot of factors at play. When it comes to cashflow though, volatility has hit the sidelines to catch its breath, giving you a chance to look at locking in profits on a few bins, considering that in the last 3 months, soybean prices are up 6.5%, corn up 7%, wheat up 11%, and canola up 22%.

China creeps back into the Canadian pea market, but India is still not buying

Where are we at with approval of aerial drone spraying?

A drone designed specifically for broadacre aerial applications of pesticides was on display at Manitoba Ag Days, at Brandon, Man., earlier this month. With some features different than the typical rotary drones you see out there now, the hybrid drone has a vertical takeoff and land. As Don Campbell, of ROGA Drone Ltd., explains in…